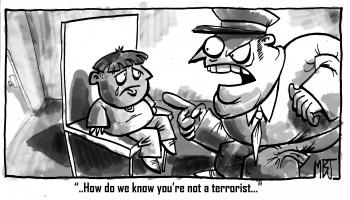 When the Pope comes out publicly warning against creeping xenophobia and racism in Italy, as he did last month in references that were interpreted as squarely directed at the Berlusconi Government, there is reason for serious concern.

For Australia in 2008, it appears the tides are turning in the other direction. Picking up a foreign newspaper in London or New York or Berlin during the decade of the Howard Government would often mean being confronted with negative stories about Australia.

If it wasn't our “inhumane” treatment of refugees or critiques of our hard-line immigration policies, it was reports on the “apartheid-like” treatment of Indigenous people down-under, or critical analysis of the Howard Government’s subservience to US lead foreign policy – especially in relation to Iraq.

But the still relatively new Australian Government has already implemented a marked change in foreign policy direction, busily winding back some of the harsher elements of the Howard era, particularly in areas of foreign policy and immigration laws.

Such changes have not gone unnoticed outside Australia. In fact, it has been widely reported here in Europe, and elsewhere over the past weeks, that Australia has just softened its mandatory detention laws, and that key detention centres are being been closed down to make way for a new approach that will see migrants that pose no security threat released into the community.

And prior to the Olympics, Rudd pulled off the diplomatic coup of the year when he spoke to Chinese students in Chinese about human rights abuses in Tibet – it was an audacious move, but one that didn't seem to do much damage to Australian-Chinese relations.

Yet the EU is currently moving towards adopting a common approach to immigration that looks a lot like the old pre-Rudd Australian model – tightly secured borders and stiff penalties for those who flout the rules, including forced detention.

It is part of a wider trend across Europe. England is currently planning to introduce ID cards for foreigners. In Italy, gypsy communities have recently been repeatedly vilified by the Berlusconi Government, and many gypsy camps have been burnt to the ground, leaving some of Italy's poorest people homeless.

In Spain, last month 15 people died while trying to cross the strait of Gibraltar that divides Spain from Northern Africa, where security is so tight that many take dangerous risks attempting the crossing, and many don't make it. Another 14 people had drowned attempting to make a similar journey when their boat sank near Motril on the Costa Del Sol a week earlier.

Nicholas Sarkozy, who currently holds the French leadership role over the EU Presidency until the end of this year, has also made cracking down on migration one of his key priorities of office. His plans include tracking down and forcibly expelling existing illegal immigrants, and dramatically tightening EU borders through armed security.

There are many tales of human misery that can be traced to Australia's Howard era immigration policies. The shattered lives, the innocent children with their childhood stripped away, the detainees who stitched their mouths in desperate protest at their predicament.

Despite the widely understood necessity to secure borders in a world of shifting populations, terrorism and global poverty, many ordinary Australians now look back in disbelief that we allowed such inhumane treatment to be meted out on people who were simply in search of a better life.

But surely Australia is now in a good position to offer the world some home truths about the consequences of such hard line and inhuman immigration laws. We could quietly inform Europe that apart from diminishing the humanity of both those who are detained and the countries that enforce such regimes – the reality is that such policies simply don't work.

As we have seen in Australia, such laws also entrench people in a position of being “illegal”, meaning they will be more likely to stay permanently for fear of being never allowed to return should they ever wish to go back to their country of origin.

Instead of keeping illegal immigrants out, such draconian legislation ultimately serves to foster and encourage people smuggling, forcing illegal migrants into underground labour situations, removing them from proper working conditions and keeping them outside of the taxation system.

A multicultural country like Australia is living proof of the value migrants can have to society – with our wonderful diversity of restaurants and the tangible contribution that skilled migrants have made to our country.

What we are finally seeing in Australia is a more sensible immigration system. It would be the perfect time for the Rudd Government to speak up about the lessons we have learnt as a nation from our dark chapter of hard line immigration laws.

Only then can we begin to restore our international reputation as a country of decency and a fair go for all.

Source:/James Norman is a communications adviser for the Australian Conservation Foundation. He is a free lance writer for media and is currently based in Berlin./