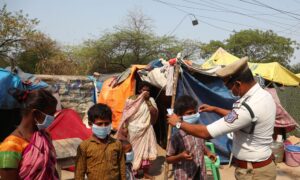 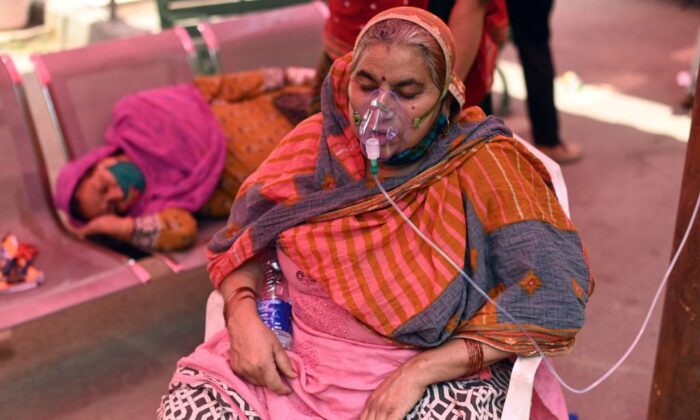 A patient breathes with the help of oxygen provided by a Gurdwara, a place of worship for Sikhs, under a tent installed along the roadside amid Covid-19 coronavirus pandemic in Ghaziabad on April 26, 2021. (Sajjad Hussain/Getty Images)
Australia

Australia is considering sending medical aid, including ventilators and oxygen supplies, to India as the country grapples with the record-breaking surge in COVID-19 cases.

For the fifth day in a row, India has set a global record for daily new cases with 352,991 new cases and 2,812 deaths in the past 24 hours. The total infected cases in the country have also surpassed 17 million, and at present, 195,123 people have lost their lives.

Greg Hunt, the federal Health Minister, confirmed that the National Security Committee would meet on Tuesday to discuss how Australia can aid India and minimise the risk of spreading the virus to Australia.

“India is literally gasping for oxygen,” Hunt said. “And while we can assist with the national medical stockpile, their particular request is for assistance with regards to the physical supply of oxygen.”

“We are in a position to be able to supply non-invasive ventilators. We are in a strong position on that front because we don’t need them at this point in time.” “We will still keep a reserve,” said Hunt, who described the situation of the world’s second-most populous country as a “health crisis on an unimaginable scale.”

“Currently, the hospital is in beg-and-borrow mode, and it is an extreme crisis situation,” a spokesman for a hospital in New Delhi, India’s capital, told SBS.

The U.K., the U.S., Germany, and France have already pledged medical equipment, including ventilators and oxygen concentrators, to India. Meanwhile, the U.S. has promised to export more raw ingredients for vaccine production.

Australia’s national cabinet announced last week a 30 percent reduction in flights, both commercial and repatriation flights, from India, with about 8,000 Australians still in the country, according to Barry O’Farrell, Australia’s High Commissioner to India.

The National Security Committee will also consider if more travel restrictions to and from India are needed, Hunt said.

“We will take them with the heaviest of hearts but without any hesitation,” he said.

“Our Indian Australian community has also suffered. Their friends and families and loved ones are in extremis; many are contracting the disease and sadly dying every day.”

Four new cases from India were recorded overnight in hotel quarantine in Perth, which just went through a snap lockdown. All four returned last Saturday, April 24. Mark McGowan, the premier of Western Australia, believes that there can be more new cases from that flight, with 79 passengers from India.