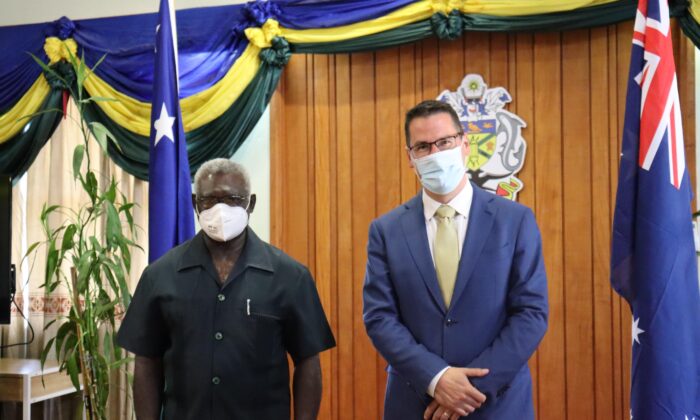 The Australian government has “respectfully” asked Solomon Islands leaders not to sign a contentious security agreement with Beijing that could open the door for troops and naval ships to be stationed in the region.

The deal, which was “initialled” on March 31 between Chinese Ambassador Li Ming, and Solomons’ Permanent Secretary of the Ministry of Foreign Affairs Collin Beck, has sparked a flurry of diplomatic activity by Australian and U.S. officials.

“We have asked the Solomon Islands respectfully to consider not signing the agreement and to consult the Pacific family in the spirit of regional openness and transparency, consistent with our region’s security frameworks,” Australia’s Pacific Minister Zed Seselja said in a statement on April 14 after dropping election campaigning a day earlier to rush to the Solomons to convince leaders to opt-out of the deal.

“We welcome recent statements from Prime Minister (Manasseh) Sogavare that Australia remains Solomon Islands security partner of choice and his commitment that the Solomon Islands will never be used for military bases or other military institutions of foreign powers,” he added, later revealing to the Australian Broadcasting Corporation that he had “frank” discussions with the prime minister.

I’ve landed in Honiara to discuss the strong & enduring relationship 🇦🇺 & 🇸🇧 share, from delivering 350,000 vaccines & working with 🇸🇧 in response to COVID19, to our leading development support.
Australia will continue to be a transparent & respectful partner.#StrongerTogether pic.twitter.com/Qxg7TytT6q

The minister emphasised Australia’s commitment to the South Pacific region in terms of aid and security.

In November 2021, Australia, along with New Zealand, Papua New Guinea, and Fiji, dispatched forces to the Solomons to help restore calm after riots broke out in Honiara which saw the Chinatown district razed and three individuals left for dead.

The protests were a flashpoint for ongoing dissatisfaction with the governance of Prime Minister Manasseh Sogavare and his decision to switch allegiances to the Chinese Communist Party (CCP) from Taiwan in 2019.

On April 12, details emerged that Beijing last year agreed to send heavy weaponry and security personnel to enhance the “safety and security” of its embassy following the November riots.

A letter from the Chinese diplomatic outpost to the Solomon Islands Ministry of Foreign Affairs reveals that the People’s Republic of China (PRC) was prepared to dispatch a range of “light weapons and equipment”, including two machine guns, one sniper rifle, 10 pistols, 10 rifles, and “police equipment” including 10 electric batons.

Further on April 7, documents emerged suggesting Beijing had been scouting for a location in the region to develop military projects.

The leaked letter of intent from Avic International Project Engineering Co., a Beijing-based state-owned aviation company, was addressed to Premier Leslie Kikolo of Isabel Province in the Solomon Islands on Sept. 29, 2020.

The letter, seen by news.com.au, was signed by company President Rong Qian and opens with the following paragraph:

“We, AVIC-INTL Project Engineering Company … present this letter to demonstrate our intent to study the opportunity to develop naval and infrastructure projects on leased land for the People’s Liberation Army Navy in Isabel Province with exclusive rights for 75 years.”

Cleo Paskal, an associate fellow of the Asia-Pacific Programme at the London-based Chatham House, has said the security pact could give the embattled Sogavare a chance to shore up control over the country.

“(Sogavare could say,) ‘We need outside help to come and create stability in the country, and our friends China will come and do it,’” Paskal previously told The Epoch Times. “And that’s when they arrest the leaders, the Malaitan leaders, and God forbid what happens to them in detention.”

“Put out the steps that the various provinces, including Malaita [Province], agreed to. There’s a whole series of things that have already been negotiated—everybody signed on, including the government under Sogavare,” she said.