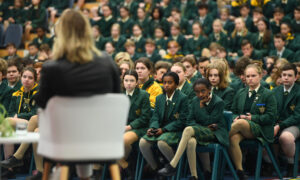 A boat carrying an estimated 105 people has capsized off of Christmas Island, a small island northwest of Australia and south of Indonesia.

The boat, which is in Australian waters, was 120 nautical miles north of Christmas Island when it sunk, according to the Sydney Morning Herald.

Rescue ships arrived on the scene and is conducting a rescue operation with support from a helicopter.

The boat appeared headed to Australia, which would make it the first boat crisis since Australian officials made a new asylum seeker policy in July that doesn’t let asylum seekers come into Australia by boat.