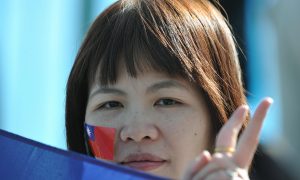 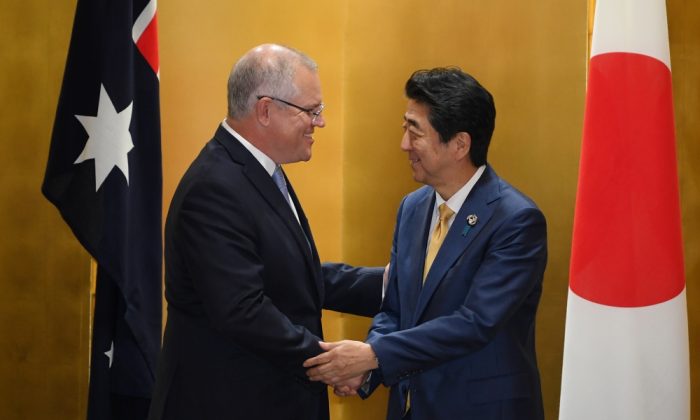 Australian Prime Minister Scott Morrison and Prime Minister of Japan Shinzo Abe shake hands during a bilateral meeting ahead of the official start of the G20 summit in Osaka, Japan, on June 27, 2019. (AAP Image/Lukas Coch)
Australia

Prime ministers Scott Morrison and Shinzo Abe met in a virtual leaders summit on July 9 to discuss ways for Australia and Japan to work together as trading partners and strategic allies as tensions grow in the Indo-Pacific region.

Morrison said the meeting would build on the Australian-Japanese Special Strategic Partnership in a time when “there was global economic and strategic uncertainty.”

“The meeting presents a timely opportunity to reaffirm the shared principles, values, and global outlook that reinforce one of Australia’s closest regional partnerships,” Morrison’s statement read.

“As like-minded democracies, we are natural partners with shared interests underpinned by open markets and the rule of law.”

As tensions heat up between Australia and China—another regional strategic partner—Morrison said he looked forward to discussing the ways Australia and Japan could deepen their defence and security ties.

AAP reported on July 9 that the leaders may also reach an agreement on the legal status of military forces stationed in each other’s country for joint exercises or other activities like disaster relief.

Australia is currently pivoting the country’s defence force towards the Indo-Pacific region in an attempt to counteract Beijing’s growing influence.

In its 2020 Force Structure Plan paper, the government also announced that it would be significantly investing in sovereign space infrastructure to “directly contribute to warfighting outcomes in the space domain.”

The leaders are expected to sign deals for co-operation between Japan and Australia’s space agencies.

Morrison and Abe’s summit will pave the way for a rescheduled state visit to Japan after Morrison’s previously scheduled visit was postponed by the bushfire crisis then affecting Australia.

The virtual summit between Morrison and Abe comes after a trilateral virtual meeting on July 8 between Australia’s Defence Minister Linda Reynolds and her Japanese counterpart, Defence Minister Tarō Kōno, and the U.S Secretary of Defence Mark Esper.

The ministers issued a joint statement on July 8 reaffirming “their joint commitment to enhance security, stability, and prosperity in the Indo-Pacific region in keeping with their shared values and longstanding alliances and close partnerships.”

The ministers also noted that the continued militarisation of disputed regions and the dangerous use of “maritime militia” to disrupt other countries’ resource exploration in the South China Sea was deeply concerning.

They singled out the East China Sea as an area of direct concern for all three nations, announcing they would now closely coordinate on the security environment of the East China Sea “with a view to deter any aggressive actions.”