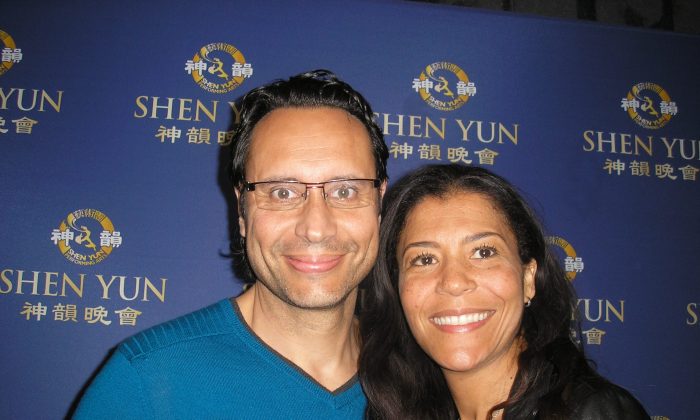 Jesus Nebot and his companion attend Shen Yun Performing Arts with a friend at the Terrace Theater in Long Beach, Calif. on Feb. 7. (Marie-Paul Baixu/Epoch Times)

“I’m just glad that I came to this show,” said Mr. Nebot. “I’m glad about the fact that they teach us about diversity, about loving cultures, and understanding from history, so that we can become better people in the future.”

Mr. Nebot went from at one time being homeless to building his own real estate company. He has won 26 international awards for his work as a writer, director, producer and actor in a number of films. He is also an inspirational speaker who has lectured in more than 30 U.S. states and 10 countries for educational, cultural, business and civic organizations.

“I love the storytelling,” Mr. Nebot said of Shen Yun. “It was so beautifully performed by all the people on the stage.”

Since 2006, Shen Yun Performing Arts has been reviving the artistic traditions of true, divinely-inspired Chinese culture, which has a history of 5,000 years, according to the non-profit company’s website.

“I was so stunned by the level of technicality of all these dancers,” said Mr. Nebot. “I think they are all very talented.”

He was pleased with the opportunity to learn about China’s rich culture and history through the performance.

“I love the stories of people trying to overcome the oppression they are feeling, the different parts of history, and how the spirit of human kindness triumphed at the end of the day,” he said. “That’s just laid very beautifully through the whole story.”

A Shen Yun performance includes principles such as spiritual devotion, benevolence, divine retribution, and the search for the meaning of life, says the company website. “These programs touch the heart and enlighten the mind.”

However, as Mr. Nebot learned during the performance, Shen Yun cannot be seen in China today.

“I find there is hope,” he said. “Even though in China there is still some level of repression, as people become more aware and more awakened and fight for their rights, we will ultimately achieve the level of peace and freedom that we all desire.”