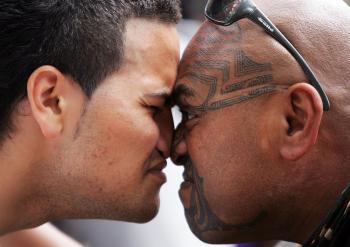 Kawiti Waetforo greets a member of the Tuhoe tribe with a hongi on Waitangi Day. Waitangi Day is the national day of New Zealand - an annual public holiday on February 6 to celebrate the signing of the Treaty of Waitangi, New Zealand's founding document, (Hannah Johnston/Getty Images)
US

Matthew Ytsma
View profile
Follow
biggersmaller
Print
Dame Judith Binney, an Auckland historian, has been awarded the New Zealand Post Book of the Year award for her extensive work on her book Encircled Lands, a book that explores the history of the Tuhoe people’s journey for autonomy.

The New Zealand Post Book Awards Ceremony was held on Friday at the Langham Hotel in Auckland, and is the one of the most prestigious literary awards in New Zealand.

Dame Binney received $NZ15,000  for her efforts, making a clean sweep of the non-fiction category, but more importantly she has given people a new understanding of New Zealand history.

In a press release, judge Paul Diamond described the book as one that will "profoundly change our understanding of our shared history" and an "exhaustive, comprehensive history of Te Rohe Potae o Te Urewera".

"Not only does it fulfill the author's hopes of revealing an almost unknown history to a new audience, it also deftly illustrates why the history of the Urewera and its people continues to resonate," he said.

To the Tuhoe people Ms. Binney is known as Tomoirangi o Te Aroha, "a little drop of rain from heaven." Her name is in recognition of her work. Many elders of the tribe were present at the awards ceremony.

{etRelate 40956, 36806}Other award winners included Brian Turner for poetry, Allison Wong for her book As The Earth Turns Silver, and Al Brown for his recipe book Go Fish: Recipes and Stories from the New Zealand Coast. All received $10,000 for their efforts.

The people’s choice awards also went to Al Brown for which he received $5,000.