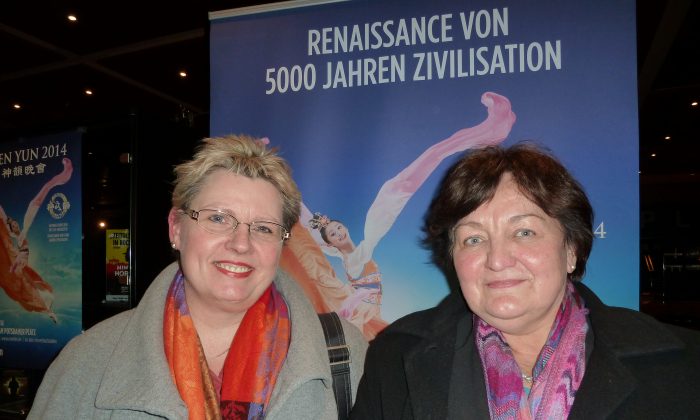 BERLIN—Ms. Ariane Thiele, attorney at the Federal Ministry of Economics and Technology in Berlin, and Christel Henk, an attorney, attended the Tuesday night Shen Yun Performing Arts show at the Stage Theater am Potsdamer Platz.

This venue, with its 1,800 seats, is one of the largest theaters in Germany. The theater opened its doors in 1999, in a place where the Berlin Wall stood.

Ms. Thiele said that she enjoyed watching the Shen Yun show and Ms. Henk agreed, “It was incredible and very well done.”

The interaction of dance, music, and stage technique was talked about by many in the audience.

Ms. Thiele said, “I was surprised by the stage technique, especially by the continuously changing pictures on the backdrop. This was so unique.”

“When I saw the figures flying through the air and then they suddenly came down and appeared on stage that was a technical feast. This was a marvelous idea and something I have never seen before,” she continued.

According to one of Shen Yun’s website, “Animated backdrops transport the audience to another world. Projected behind the dancers, the hi-tech images lift the stage and set it amidst blossoming landscapes, deep forests, Mongolian prairies, or celestial paradises.”

Her friend chimed in, “The choreography was very well done.”

“The music was outstanding. This was so totally different from what I had ever heard before. I found it very melodic and was surprised to have enjoyed it more than I expected,” said Ms. Thiele.

Continuing the thought, Ms. Henk said, “The music was very emotional and harmonized very well with the dances. It was wonderful.

The playbill also states: “Shen Yun’s one-of-a-kind orchestra, with its all-original compositions, blends East and West like no other. The distinctly Chinese sound of ancient instruments like the erhu and the pipa are bathed in a rich sea of Western strings, percussion, woodwinds, and brass.”

Both will tell others about the Shen Yun show and Ms. Thiele said, “It is a great performance, beautiful dance performances, perfect steps, everything was harmonized and a pleasure for the to see.”

Ms. Henk chimed in, “It was a great cultural experience.”

Reporting by Wen Jing and Heide B. Malhotra