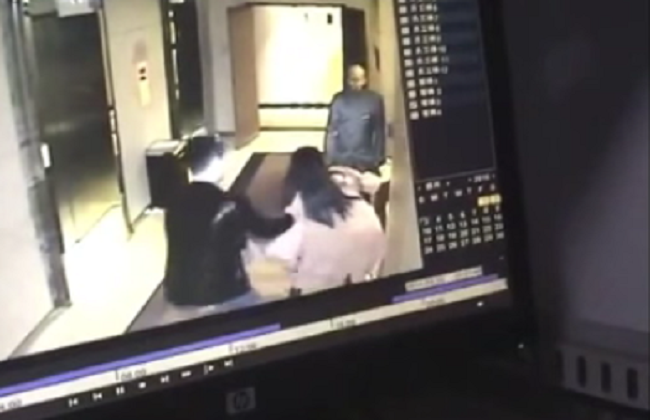 Details of the violent assault and attempted kidnapping of a woman staying at a low-budget hotel in Beijing have gained close attention on Chinese social media, especially since the woman’s cries went ignored by hotel staff and police dismissed her case.

The woman, identified by her username “Wanwan_2016,” described in multiple posts on Sina Weibo how her attacker had confronted her right outside her room, then grabbed her by the throat and tried to drag her down a hallway towards the elevator. Several people, including a  hotel worker, ignored the struggle, thinking it a quarrel between a couple.

The April 3 scene is recorded in a video showing security footage from the Yitel hotel that Wanwan uploaded to Weibo.

But when she contacted the police, Wanwan wrote in a Weibo post, the police said that the officers in charge of “such cases” were currently off duty.

Wanwan was only rescued when an older woman came to her aid, scaring the attacking man into fleeing via the fire escape.

The internet reacted with outrage at the negligence of the hotel staff and police who ignored the woman’s struggle and brushed off her case. Within days, Wanwan’s posts had garnered about 50,000 comments from angry netizens. The video was shared over 65,000 times.

“I suddenly feel sad because I live in a country where posting on Weibo is more useful than reporting to the police,” one comment summed up Wanwan’s experiences.

Online comments users speculate that the Yitel hotel was engaged in the prostitution business and that the woman was attacked when the man mistook her as a prostitute who hadn’t paid protection money.

Prostitution is illegal in China, but prevalent. Cards advertising call girl services are commonly found in hotels like Yitel, where prostitution and other illegal activity is rampant. For young Chinese women travelling alone, this presents an especially risky environment.

Comments from female netizens reported having similarly unpleasant experiences at budget hotels, including one who was stalked in the hallway by a man and another who was woken at 3 a.m. by a man trying to enter her room.

Another user, “Misisiwen,” said she once stayed in a Home Inns property in Shanghai and was stalked by a male after she walked out of the elevator.

Wanwan’s video, shot by phone camera at a police station, shows the security footage playing while she and a man talk in the background. At various points, the woman cries while watching herself be assaulted.

The woman says that the hotel has tried to get her to delete her posts by offering her money. Netizens organized small physical protests outside of Yitel in support of Wanwan.

Yitel Hotel, owned by the Shanghai-based Home Inns Group, held a press conference on April 6, apparently because of the widespread attention the woman’s case had gotten on social media.

Chief manager of Yitel Hotel, Liu Hongni, refused to answer any questions, redirecting reporters to the hotel’s social media account. “All the answers are on our official Weibo account,” Liu said.

In the brief online statement, the hotel admitted that there had been “holes in security and customer services that would be cleared up shortly.”