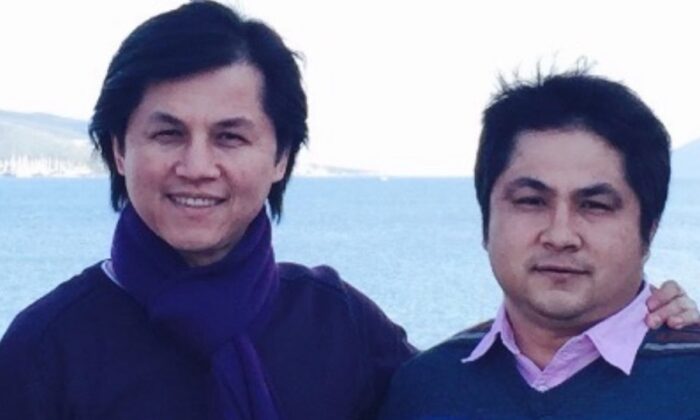 Nury Turkel and his brother, Mamutjan Turkel (R), in Turkey in 2014. (Courtesy of Turkel family)
Thinking About China

Attack on Senior US Official’s Brother May Have China Link

Nury Turkel, one of the world’s most prominent Uyghurs, is under pressure from Beijing. The Washington-based American lawyer was instrumental in legislative and executive actions by the U.S. government to support Uyghur human rights in China.

In the context of rising transnational repression by Beijing, including violent attacks linked to the Chinese Communist Party (CCP), Turkel’s brother was hospitalized in Fairfax, Virginia, with severe wounds, allegedly by an attacker who had previously called Turkel a “traitor” for his views on China.

Turkel co-founded the Uyghur Human Rights Project (UHRP) in 2003. Speaker of the House Nancy Pelosi (D-Calif.) appointed Turkel to the Commission on International Religious Freedom in 2020, where he currently serves as vice-chair. He has bipartisan support in Congress, including from Sen. Marco Rubio (R-Fla.), who publicly recognized Turkel for his facilitation of the Uyghur Human Rights Policy Act of 2020.

That year, Turkel said before Congress that “Even testifying at this hearing may cost the lives of my parents, but you know, it’s the right thing to do.”

On April 2, Turkel’s father died in Urumqi, the capital of China’s Xinjiang region, known among independence-minded Uyghurs as East Turkestan. Turkel’s father was almost 83. Turkel ascribes the death to old age, and health conditions worsened due to harassment, intimidation, and social isolation he endured in recent years.

But news of the death came just as Turkel landed in Tashkent, Uzbekistan, for official U.S. government meetings with senior officials and civil society who work on religious freedom and human rights. Tashkent is also in Central Asia, just 950 miles from Urumqi.

Turkel felt guilty, he told me on the phone, for not attending the funeral and visiting his widowed mother in Xinjiang, despite being so close.

Traditionally, Uyghur children carry and lower the casket of their parents into the grave and throw dirt on the departed while saying prayers. That is impossible for Turkel, who Beijing sanctioned in December and permanently banned from entering China. Were he to return, he would risk detention in the concentration camps, forced labor, torture, or worse.

Attacks on the Turkel-Kadeer Family in Virginia

This raises questions about whether there could be a link to Beijing. Pro-CCP thugs in places like New York, London, and Hong Kong have attacked dissidents and human rights advocates while trying to keep blame from reaching Beijing.

The alleged perpetrator is Uyghur, but that does not automatically absolve him from links to the People’s Republic of China (PRC). According to reports cited by the Congressional Research Service, “PRC diplomats use informants in Uighur communities in Germany, Sweden, the United States, and elsewhere.”

According to one of my sources in the Washington area, “China has infiltrated the East Turkistani/Uyghur diaspora at all levels and this needs to be addressed.”

The victim, Mamutjan, is married to the daughter of Rebiya Kadeer, a Uyghur businesswoman who in 2006 was elected president of the U.S. government-supported World Uyghur Congress (WUC) and Uyghur American Association (UAA), and nominated for a Nobel Peace Prize. In apparent response, Beijing allegedly had her sons beaten in Urumqi, and made her the target of what appears to have been a China-linked vehicular assassination attempt in Fairfax, Virginia, that year.

Fairfax has a thriving Uyghur community.

The alleged perpetrator of the latest attack in Fairfax, Ibrahimturkistani, has been a member of a Uyghur organization in the Washington area, according to the group’s website. It calls itself the East Turkistan Government in Exile (ETGIE) and purports on its website to be the “Sole Lawful Representative of the People of East Turkistan.”

There are multiple competing ETGE groups. This one is led by Anwar Yusuf Turani, who established the first such group in 2004. The group later expelled Turani for visiting China and on suspicion of working for the regime, according to a source. Another person linked to the group allegedly previously worked for China’s Ministry of Foreign Affairs.

Turani did not recognize the expulsion, according to the expelling group, and continued to claim leadership of what became a separate ETGIE.

Turani’s group allegedly supports violent means and a strict and public independence message that serves as a litmus test and divides Uyghurs between establishment and radical factions.

The allegations above could not be independently confirmed, and Turani did not immediately reply to requests for comment. An involved member of his extended family, also questioned about Ibrahimturkistani, referred me to the latter’s lawyer and refused to comment on any of the allegations.

Two sources told me that Ibrahimturkistani is highly critical of China, but not intelligent, and one said he is easily manipulated by others. Ibrahimturkistani’s social media shows him training with a punching bag, holding large knives in what looks like a martial arts stance, and showing off a large ring of the type that he allegedly wore while attacking Mamutjan.

Members of Turani’s group have been publicly critical of U.S. government-supported Uyghur groups or their leaders, according to sources. The WUC, UAA, and UHRP, for example, do not explicitly promote the independence of East Turkestan. Competing ETGIE groups use this against them when appealing to the Uyghur diaspora.

Rebiya Kadeer led the three U.S.-supported groups mentioned above from 2006 to 2017. She and those who followed support independence privately, but focus their public work with governments and human rights organizations around the world on the less controversial human rights issues.

It is their long relations with U.S. and European governments, and their ability to get legislation that supports Uyghurs in China, that particularly threatens Beijing. For that reason, the CCP has targeted Kadeer, Turkel, and other establishment Uyghur leaders for years, possibly including the alleged assassination attempt against Kadeer in 2006 and cyberbullying and threats against Turkel.

Frank Wolf, former representative for Virginia’s 10th congressional district (including parts of Fairfax County) from 1981 to 2015, raised concerns about “a collision between a car connected to the PRC government and Uighur leader Rebiya Kadeer’s car,” according to the Congressional Research Service in a 2010 report.

“It is unclear if the perpetrator was ever apprehended,” Kadeer’s daughter and Mamutjan’s wife, Akida Rouzi, wrote in an email.

“We tried inquiring about the case by contacting the police department several times that year and during our last conversation with them, we were told the federal investigators had taken over the case, and the police department could not provide further information. Frank Wolf released several statements and publications after, citing China’s involvement.”

On April 14, Ibrahimturkistani allegedly punched and kicked Mamutjan’s head, as well as strangled him, in a parking lot in Fairfax, Virginia. Mamutjan’s injuries, including a broken bone near his eye, required stitches and the surgical implantation of a metal plate, according to Turkel.

Mamutjan described in an email to me, sent by his wife, how Ibrahimturkistani allegedly started the fight with aggressive words and stares while the victim attempted to park his car. Mamutjan tried to avoid the conflict by proceeding “to turn around and walk away. That is when I felt the first blow to my face just around my eye,” Mamutjan recounted.

Ibrahimturkistani allegedly had at least one large ring on his fingers, which “caused fractures in my skull and several facial lacerations,” according to Mamutjan. “That first punch, which took me off guard, caused severe bleeding, dizziness, loss of sight from the right eye, and loss of strength in my body.”

Nevertheless, Mamutjan then tried to push and punch back, he wrote to me. But the effort was apparently ineffectual.

“After what felt like minutes of being repeatedly punched in the face and the head, I found myself face down on the ground. As I was trying to push myself up, he kicked my head into the cement … I might have lost consciousness at this point … I don’t remember much. When I regained consciousness, I found him on top and strangling me while I was on the ground. I struggled to get his hands off me, but I managed to do so at some point. Then I remember finally being able to land a few punches on his face. He then fell to the ground and got up very quickly.”

Mamutjan finally made it back to his car, where he found a metal bar, he said in the email. That apparently deterred Ibrahimturkistani from continuing the alleged assault.

Mamutjan wrote that he then saw Ibrahimturkistani “take his phone out to record me, and I heard him brag ‘I have just beaten Nury Turkel’s brother’ or something similar to that. He then went inside the mosque, and I sat outside and called 911.”

In the mosque, Ibrahimturkistani promptly and loudly announced the fight to those in attendance at the funeral, including several Uyghur leaders, according to Nury Turkel, who was in the room where the funeral took place.

At least one member of the Turani family was also at the funeral, according to a source.

Ibrahimturkistani then faced Turkel directly and told him to go take care of his brother, according to Turkel. In the process, he hurled insults at the U.S. official.

Turkel found it strange that the man, who had just entered the room, knew exactly where he was sitting.

When the police arrived, they sent Mamutjan and Ibrahimturkistani to the hospital, where the latter was shackled to his bed. He was then arrested and a felony warrant issued. He was released on April 25 with a bail of $25,000, but with supervised and restricted movements, according to a source. The court order included “malicious bodily injury” as the alleged offense.

Ibrahimturkistani’s lawyer did not immediately respond to a request for comment.

US Government Should Investigate and Protect

Turkel interpreted the attack on his brother as political and aimed at himself and his extended family of Uyghur leaders.

“I refuse to live with the fear even given the cyberbullying and hatred being promoted by a group of people, including this individual,” Turkel told me. “I believe that should concern the American people.”

U.S. government officials should thoroughly investigate the case and reexamine the alleged assassination attempt against Rebiya Kadeer. They are consistent with the CCP’s pattern of violent transnational repression against human rights defenders through front groups that provide Beijing with plausible deniability.

If a senior U.S. government official, Nobel Peace Prize nominee, and their U.S. citizen family members are not safe in the Washington area, then none of us are, and neither is democracy.