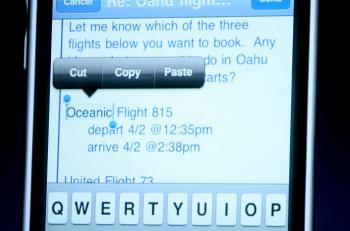 A demo of the new cut and paste feature for iPhone is seen during an event at Apple headquarters in Cupertino, California. AT&T enabled MMS features for Apple's iPhone on Friday, Sep 25. (Justin Sullivan/Getty Images)
News

By Andy Thomas
biggersmaller
Print
NEW YORK—AT&T has finally enabled MMS (Multi-Media Messaging Service) functionality on the iPhone, and some iPhone owners should be smiling.

Apple originally announced that it would support the feature in March 2009 with its version 3.0 update of the operating system; an update that would work on second-generation iPhones and later. But lack of support for MMS on AT&T's cellular network meant that iPhone users would not be able to use the multimedia messaging features from their iPhone.

While the iPhone's MMS feature has been usable by users in 29 countries through the service providers there, the feature has not been available till September 25th in the United States, when AT&T was finally able to enable MMS messages to be sent through its network.

The feature adds another dimension to the messaging world which has taken off in the last several years.

But there are doubts whether enabling MMS will cause a strain on carrier AT&T's cellular and 3G data network, due to on-going problems with the company's inherent network capabilities.

When the iPhone first launched in June 2007, there were consistent complaints from iPhone users about dropped calls and poor call quality.

Since Apple announced the MMS feature in March, there have been many complaints by customers.

In August 2009, at least three consumers filed lawsuits against Apple and AT&T. The lawsuit filed in late August claimed that the Apple's "print and video advertisements…on television, the Internet, the radio, newspapers" had misled users into believing that MMS functionality was already operational on the iPhone.

Apple's iPhone has been hugely popular. The device, which supports wireless and 3G cellular networks, combines a phone, and music player and a PDA (personal digital assistant) allows users to make phone calls, play audio and videos, take photos and browse the web with software built into the system. In addition, users can install Apple-approved software through Apple's App Store.

After the company announced the iPhone in January 2007 and released it in June 2007, sales of the iPhone have taken off, especially after Apple released the iPhone 3G in the fourth quarter of 2008 and dropped the entry price of the device in exchange for a two-year contract with AT&T's service.

As of the second quarter of 2009, Apple had announced worldwide sales of more than 21 million iPhones The iPhone is estimated to have captured 13% of the worldwide market for smartphones, according to marketshare data from technology analyst firm Canalys.

In the United States, Apple has an exclusive contract with AT&T to provide cellular services for the iPhone.