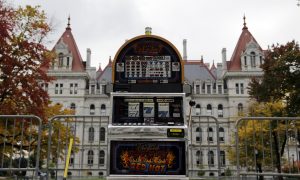 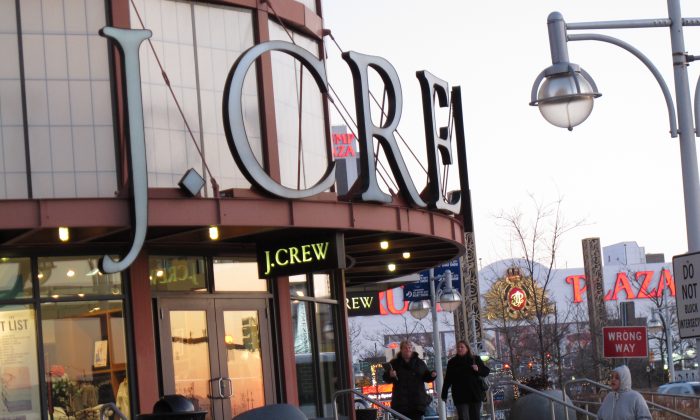 In this Jan. 31, 2012 file photo, Shoppers stroll through The Walk, an outlet shopping district a few blocks from the casinos, in Atlantic City, N.J., Jan. 31, 2012. The shopping district is part of an effort to diversify Atlantic City and make it less reliant on gambling revenue, which has been plummeting since 2006. (AP Photo/Wayne Parry)
New York

Atlantic City Doomed by Glut of Casinos in Region

ATLANTIC CITY, N.J.—The rapid disintegration of Atlantic City’s casino market might be an early indicator of what could happen in other parts of the country that have too many casinos and not enough gamblers.

In the 36th year of casino gambling in New Jersey, which not too long ago had a monopoly on the East Coast, the casino industry is crashing with a suddenness and a fury that has caught many people here by surprise. It started the year with 12 casinos; by mid-September, it could have eight.

The Atlantic Club shut down in January, taken down by two rivals, stripped for parts, and closed in the name of reducing competition, eliminating 1,600 jobs.

In recent weeks, the owners of the Showboat and Trump Plaza announced plans to close, and Revel, which opened two years ago, said it, too, will close if a buyer can’t be found in a bankruptcy court auction next month. That would put nearly 8,000 workers—about a quarter of the city’s casino workforce—on the street.

“Most of us had expected one or two places to close this year and that would be it for a while, and it would give us a chance to catch our breath,” said state Sen. James Whelan, a former Atlantic City mayor. “This is happening very quickly, and it is absolutely devastating to our region.”

David Schwartz, director of the Center for Gaming Research at the University of Nevada–Las Vegas, said casino markets around the country could find themselves in a similar situation—and soon.

Connecticut’s tribal casinos have been affected by New York casinos and face an even greater challenge from new casinos going online soon in New York and Massachusetts. Mississippi, where Caesars Entertainment recently shuttered a casino in Tunica, has struggled with competition from expanded gambling in the Midwest and Florida.

Even Pennsylvania, which overtook Atlantic City as the nation’s No. 2 casino market, is seeing its own casino revenue stagnate as competition grows.

“For the past 36 years, Atlantic City was basically a place people drove to play slots,” Schwartz said. “Now, the last thing people in the Northeast need is to drive somewhere far away to play slots.”

How did this happen?

The most immediate and powerful reason Atlantic City’s casinos are struggling is because of a glut of casinos in nearby states. Since late 2006, when the first casino opened in neighboring Pennsylvania, Atlantic City’s casino revenue has fallen from $5.2 billion to $2.86 billion last year. Casinos have now popped up all around New Jersey; in New York, a Manhattan casino could open before the end of the decade.

For years the casinos failed to plan for the day when they wouldn’t be the only game in town. For decades, they were content to offer gambling—and little else. It wasn’t until the Borgata entered the market in 2003 that Atlantic City realized the need to diversify the experience their customers could receive. That drive to offer spas, gourmet restaurants, upscale shopping, and hip nightclubs—now underway with a fierce urgency—comes at a time when most people in the region live within an hour of a casino, lessening the need to drive to Atlantic City.

Companies took on mountains of debt to buy or expand casinos in Atlantic City. That wasn’t so much of a problem when revenues kept increasing, but when competition and the Great Recession hit with a one-two punch, the debt became crippling. That led to layoffs, delayed new investments, and some maintenance. Caesars Entertainment, which is closing the Showboat, has among the highest debt levels in the industry and has been trying to improve its balance sheet by closing some properties.

Analysts also said the resort needs more air service from the rest of the country and more capacity to host conventions and meetings—both of which Atlantic City is now trying to address.

Wall Street analysts said contraction is actually good for Atlantic City. The closings and layoffs are an economic self-correction to what had been an over-saturated market. Even Atlantic City’s mayor, Don Guardian, said the market will determine how many casinos it can support. He vows to remake the city as a place with lots to do besides gambling.

Melanie Gillespie, a beverage server at the Showboat with an 11-year-old daughter, is optimistic she and her co-workers can rally public opinion against the closings and attract new buyers for at least some of them. But she’s already preparing her daughter in case that effort falls short.

“She’ll ask me for something, and I have to think long and hard before we go out to a movie or the waterpark now,” she said. “I’m really not sure what we’ll do. I haven’t given up hope yet, though.”