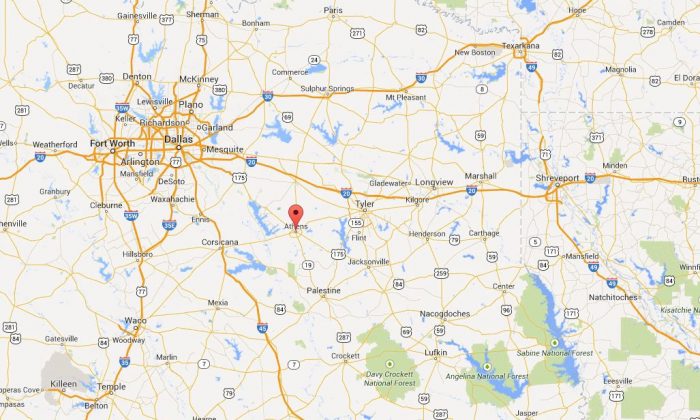 Athens, Texas on Google Maps
US

Athens, Texas, is being evacuated on Thursday evening due to a fire at a fertilizer plant, according to reports.

The plant is located in downtown Athens, reported WBTV.

A three-block radius was being cleared out by police due to the fire. Emergency crews are currently fighting the fire.

No explosion has yet to be reported.

It’s unclear if there has been any injuries.

ATHENS, Texas (AP) — Police say they’ve cordoned off a five-block radius from an East Texas farming supply lot where a firefighters are battling a fertilizer fire.

The fire is in Athens, Texas, a town of about 13,000 residents about 70 miles southeast of Dallas. It’s unclear how much fertilizer is involved in the fire or if it’s of the explosive ammonium nitrate type.

However, police are telling reporters at the scene that no injuries have been reported.

The lot is situated alongside the Union Pacific railroad tracks about 3 blocks from the Henderson County Courthouse at the center of the town’s business district.

Fertilizer fires have been of concern in Texas since an April 2013 fertilizer plant explosion killed 15, injured about 200 others and devastated the Central Texas town of West.