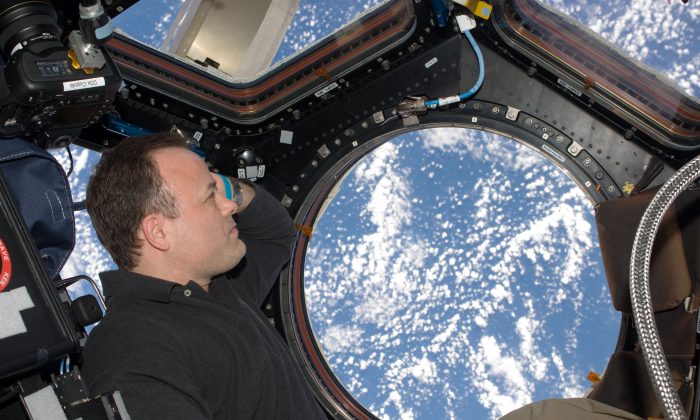 Leaving the Earth, disconnecting from the bonds of human society to push into the darkness of space with only a few companions, has strangely left astronaut Ron Garan with a feeling of profound oneness with humanity.

“The inescapable truth is that each and every one of us is riding through the universe on the spaceship called Earth,” Garan said. “I like to call it ‘the orbital perspective’ … We are all connected. … I have a feeling of empathy, of interconnectedness.”

In the orbital perspective, you see the world as a whole. You don’t see borders from space, Garan said—or at least not usually. The one time he could see a national border from space, it had a big impact on him.

When he was at the International Space Station (ISS) in 2011, he saw a long, illuminated line blazed across a swath of Earth—the border constructed between India and Pakistan. The contradiction of the orbital perspective struck him: we are given great beauty, but conflicts rage and people suffer of hunger and disease.

These problems could be solved, Garan said, if everyone had the orbital perspective. From space, he sees life on Earth on a truly global scale. If humanity could do the same, the primary obstacle to solving the worlds problems—our inability to collaborate on a global scale—could be eliminated, Garan said.

But the very existence of the ISS proves this is possible, he said. Many nations came together, some of whom have rocky political relationships with each other, to explore space.

“I think the biggest misconception is that [space exploration] is a waste of money,” he said. “I think it’s the best investment we have in our future.” The technological advancements made in the pursuit of space exploration lead to improved medical treatments and more on Earth, he said. “There’s a tremendous payback in very small investment, an investment of less than 0.5 percent of the [national] budget.”

Talking about the spiritual effect space travel has had on him, Garan said: “I think that whatever beliefs or faith or convictions or philosophies I was launched into space with were reinforced, not changed. They were confirmed and strengthened and made richer and deeper through the experience.”