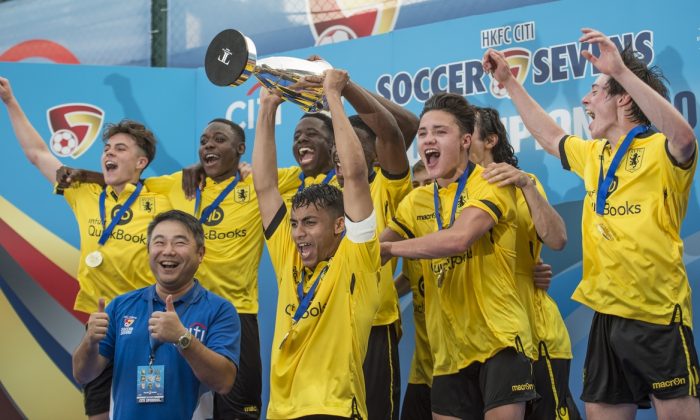 Aston Villa won the main competition of this year’s HKFC Citibank Soccer 7’s held over the weekend of 20-22 May 2016 at the HKFC ground at Sports road, winning their 6th title in the 17th version of the annual event. Leicester City won the Shield competition, Stoke City won the Plate competition, and Citibank All Stars collected the Masters Trophy.

Aston Villa defeated West Ham United 2-nil in Sunday’s final with goals from Harry Mckirdy and Rushian Hepburn Murphy for their first title since 2010, when they had beaten Rangers 3-2 in the final. They reached the final after eliminating Kashima Antlers 3-1 in the quarter final, and Wellington Phoenix 2-nil in the semi-final, and only conceding one goal over the duration of the tournament. West Ham United will look to return with hopes for a better outcome next year having been beaten finalists in consecutive tournaments. West Ham United had accounted for Hong Kong Eastern in the quarter final and Newcastle United in the semi final.

Leicester City collected the Shield trophy after defeating Eastern 3-2 in the final having knocked out Kashima Antlers in a penalty shoot out in the semi final after both sides had lost their cup quarter final games to Wellington Phoenix and West Ham United respectively.

Stoke City won the plate final with a 2-nil victory over Hong Kong under-21’s on their second visit to the event, and will look to future tournaments to proceed to the group stages of the main competition, being the only seeded team not to make that stage this year. Hong Kong under 21’s will also look to make further progress in future events.

In the Masters competition, Citibank All Stars bounced back from a defeat in the round robin group matches to beat HKFC Chairman’s select in the semi final before beating last year’s winners USRC 3-1 in the final courtesy of two goals from former Blackburn and Liverpool striker David Thompson, and Deon Burton.