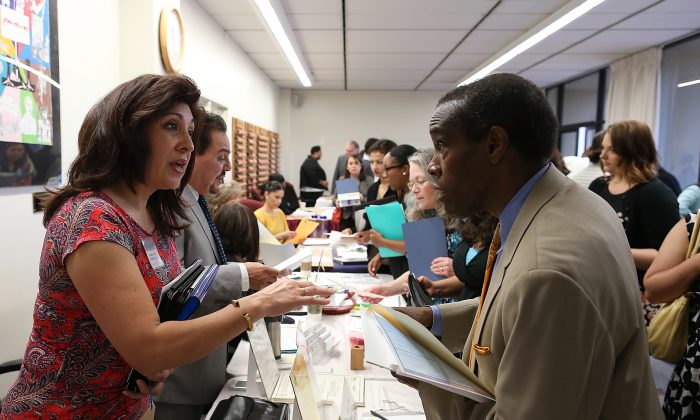 A job seeker (R) meets with a recruiter at an Office of Education job fair on April 24, 2013, in Hayward, Calif. Almost half of America’s college graduates are unable to land a job commensurate with their education. (Justin Sullivan/Getty Images)
Business & Economy

American workers shifting toward underemployed and the underground economy
By Heide B. Malhotra

Media and market experts report that the U.S. unemployment figures are decreasing. The latest headlines state that the United States is experiencing the fewest unemployment claims since January 2008, that they have dropped to a five-year low, or that the present unemployment situation couldn’t get much better.

However, the true unemployment situation is worsening, and many in the media as well as market experts have not done their research.

“At a minimum, the markets and pundits reaction to today’s job report is overly optimistic and frankly, not very objective,” suggests a May 3 article on the Seeking Alpha website.

The official published unemployment rate was 7.5 percent at the end of April, which includes workers receiving unemployment benefits but not those accepting temporary work, those working part-time who want to work full time, or those who became discouraged and have given up looking for employment.

The unemployment rate would increase to 13.9 percent, up 0.1 percent from the March rate, if those no longer receiving unemployment benefits were included, according to the alternative measures of labor underutilization table, published on the Bureau of Labor Statistics (BLS) website.

“The official unemployment rate of 7.6% (also known as U-3) is every politician’s favored rate to quote because it notoriously under reports the real unemployment rate. A much more accurate measure of unemployment (still coming straight from the government) is known as U-6,” suggests an April 30 article on the Optimus Advisory Group website.

A May 3 article on the Seeking Alpha website suggests that the April job numbers were the worst since April 2009, basing its conclusion on the average weekly hours worked.

Although the average weekly hours worked between March and April dropped by only 0.2 hours, that is, from 34.6 hours to 34.4 hours, when looking at the total hours worked in April compared to March, the hours decreased by 21.39 million hours.

The economy expands when total work hours and productivity are increasing. The total hours worked from April 2012 to April of this year have increased by a mere 1.3 percent, and productivity for the same period increased by 0.9 percent. The article does not compare these percentages with those of a prior year, but states that the numbers are unfavorable.

According to the Seeking Alpha article, “Productivity growth has stalled these last 2 years.”

Almost half of America’s college graduates are unable to land a job commensurate with their education. They are working, but at jobs that don’t require a bachelor’s degree, according to a January study published on the Center for College Affordability & Productivity (CCAP) website.

Around 1970, 1 percent of college graduates were taxi drivers and 2 percent worked as firefighters. Today, over 15 percent of employees in these two professions have graduated from college.

There are many jobs that don’t require a high school diploma, yet, back in 2010, 50,000 people that held a college degree accepted such positions. Most graduates had accepted retail sales positions, cashiers, and wait staff jobs, with some working as cleaners and construction laborers.

Between 2010 and 2020, positions that do not require but might be filled by people with college degrees include nursing, sales persons, clerks, waiters, truck drivers, laborers, and carpenters.

American universities are churning out too many college graduates and the market can’t absorb them. It creates a domino effect. People with advanced degrees are crowding out those with high school diplomas, pushing the unemployment situation to those with little or less education. These people with a lesser education are not counted in unemployment figures, as they rarely are eligible for unemployment compensation.

“No doubt, slow increases or actual decreases in employment have aggravated an already-existing phenomenon of underemployment for college graduates, but any thought that this is a temporary problem related to the business cycle is wishful thinking,” suggests the CCAP study.

A December 2010 report from CCAP suggests that between 1992 and 2008, 60 percent of college graduates accepted jobs that didn’t require a college degree. The lesson learned from such numbers is that the economic concept of the law of diminishing returns can be applied to the degree of educational attainment.

For example, in 1967 there were fewer college graduates, and still 10.8 percent of these graduates couldn’t find a job commensurate with their education. Going forward to 2008, the number of college graduates in lower level jobs increased to 35.3 percent.

The article suggests that increasing financial aid for those that couldn’t afford college otherwise is a mistaken public policy.

Furthermore, the underemployment of college graduates “is not a new problem that has emerged out of the 2007-8 recession that will recede as the economy strengthens. … This is not a business cycle phenomenon, but rather a long-run trend,” according to the 2010 CCAP report.

“Doing what they can to survive in a dour job market, millions of Americans exist in an underground economy that has ballooned to $2 trillion annually,” states an April 29 article on the Money Morning website.

The underground economy, also called a black market, shadow, or informal economy, is an economic activity where people are paid in cash for their work and don’t report such income to the tax authorities.

Since the economic meltdown, people have become self-employed, turned into irregular workers, or freelancers that get paid under the table, circumventing the American tax system.

“The Internal Revenue Service estimated that the losses from unreported wages have grown from about $385 billion in 2006 to about $500 billion last year,” and state governments estimate that they lose about $50 billion annually, reports the Money Morning article.