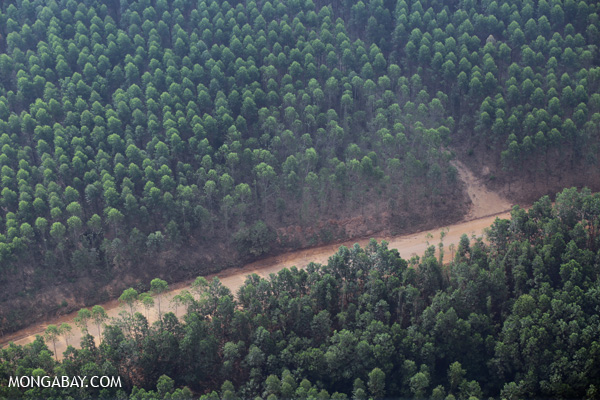 The results, which were disclosed this week in an update on APP’s Forest Conservation Policy, show that APP has sufficient plantation resources to supply a massive new mill being built in OKI, South Sumatra. That project had raised concern among some environmental groups that APP wouldn’t be able to abide by its high-profile zero deforestation commitment, which it established in 2013 after long-running campaigns by Greenpeace, Rainforest Action Network, WWF, Canopy, Greenomics-Indonesia, and other NGOs.

“We are pleased to be able to reassure everyone that APP and its suppliers have sufficient resource for the company’s 100 per cent plantation target,” said Scott Poynton, the Executive Director of TFT, a non-profit that has now brokered zero deforestation agreements with several of the world’s largest commodity producers and buyers, including Nestle and palm oil giants Golden Agri Resources and Wilmar. “We have identified one minor gap in 2020 but this can be easily filled by increasing the productivity of the plantation operations between now and then.”

The study comes 18 months after APP established its zero deforestation commitment, which the company now calls “central to its business model”.

“We can continue our operations and expand profitably without having a detrimental impact on forests in Indonesia or anywhere else in the world,” said Aida Greenbury, APP’s managing director of sustainability, in a statement. “The TFT report forecasts a minor gap in supply in 2020. However it is clear that with a harvesting rotation of around five years, improvements made now can bridge that gap by increasing productivity of supplier plantations through improved yield, better tree stock and reduction of waste. As such, we have been developing an action plan to ensure we have sufficient plantation fibre to meet the pulp requirements of our existing mills as well as our future mill in South Sumatra, in line with our target to become a 100% plantation business for pulp production.”

APP says the report will be independently assessed by Rainforest Alliance when it conducts its audit of the company’s compliance with the zero deforestation commitment. That audit will be closely watched as a potential “seal of approval” of APP’s progress in moving away from its past practices, which were widely condemned for years by the environmental community for destroying rainforests and peatlands — including critical habitat for endangered species like tigers — on the island of Sumatra. Earlier this year, APP announced a new initiative that would “protect and restore” a million hectares of habitat across Sumatra and Indonesian Borneo.

This article was originally written and published by Rhett A Butler, the head administrator for news.mongabay.com. For the original article, please click HERE.