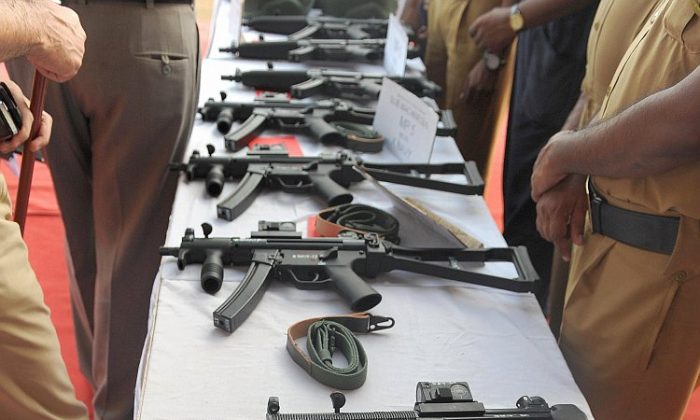 Indian policemen inspect various imported automatic weapons on display during a function to review the counterterrorism set up in Mumbai on Aug. 27, 2009. (Indranil Mukherjee/AFP/Getty Images)
International

The world’s five largest importers of weapons over the last half decade are all in Asia, reflecting a variety of tensions playing out in the region, according to newly released data from Stockholm International Peace Research Institute (SIPRI).

The report released on Monday, shows that India is now the world’s largest importer of major conventional weapons, comprising about 10 percent of the total arms imports in the world. Its troubled neighbor Pakistan, with which it shares a highly uneasy relationship, is No. 3.

China, which was the top importer between 2002 and 2006, is now No. 4, which is largely explained by the fact that it is importing less and exporting more, representative of a growing trend.

“Major Asian importing states are seeking to develop their own arms industries and decrease their reliance on external sources of supply,” said Pieter Wezeman, senior researcher with the SIPRI’s Arms Transfers Program, in a statement.

China is currently the world’s sixth largest exporter, increasing its exports by 95 percent in 10 years.

“This is largely a result of Pakistan importing more arms from China,” said Paul Holtom, director of the SIPRI Arms Transfers Program in a press release.

South Korea, which is still technically at war with its unpredictable and belligerent North Korean neighbor, is the world’s second largest arms importer. The military tension on and around the Korean Peninsula has more or less ebbed and flowed with the mood swings in Pyongyang. Last month relations looked hopeful, as North Korea agreed to a moratorium on its nuclear program and missile testing, but already violated the promise by announcing Friday it will launch a long-range rocket.

Other tensions in the region are also impacting the arms trade, particularly regarding maritime border issues in the South China Sea, SIPRI points out.

The No. 4 importer, China, has provoked almost every other nation in the South China Sea over sovereignty claims. Singapore, close ally to China, is the fifth biggest importer.

Overall, Southeast Asia as a region overall increased its weapon imports by 185 percent in the last 10 years, with many countries’ figures skyrocketing; Vietnam (up 80 percent), Indonesia (up 144 percent), and Malaysia (up almost 300 percent).

SIPRI’s figures are based on a system they developed intended to represent the transfer of military resources, based on known production costs and data about actual deliveries. They have created a unit called trend-indicator value (TIV) to compare the transfer of major conventional weapons. The TIV takes into account things such as range, size, delivery systems, complexity, and age of the weapon, among others.

In all, the international transfer of major conventional weapons increased by 24 percent compared to the preceding five-year period.

Among other significant increases in imports over the last decade, many were also found in Africa, which is up 110 percent as a continent.

Morocco alone went up 443 percent in that period; many were purchases in the last year. Other large importers are Algeria, Morocco’s regional rival, and sub-Saharan African countries like Uganda and Kenya.

Among the exporting nations, the United States (top client: South Korea) and Russia (top client: India) are still by far the largest, with 30 and 24 percent of the market respectively. They are followed by Germany, France, and the U.K.

The report also could not find any major impact on the arms trade due to the Arab Spring movement. Russia, which has been the main supplier of weapons to Syria in the last 10-year period, providing 78 percent of its arms, has contributed to its massive 580 percent increase in imports, and trade is ongoing.

The United States is and has been a major supplier of weapons to Egypt. Mark Bromley, senior researcher at SIPRI noted that despite public and parliamentary debate in several supplier states, the impact on actual policies has been limited.