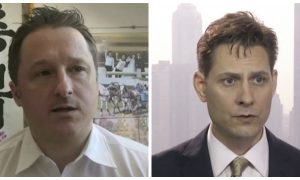 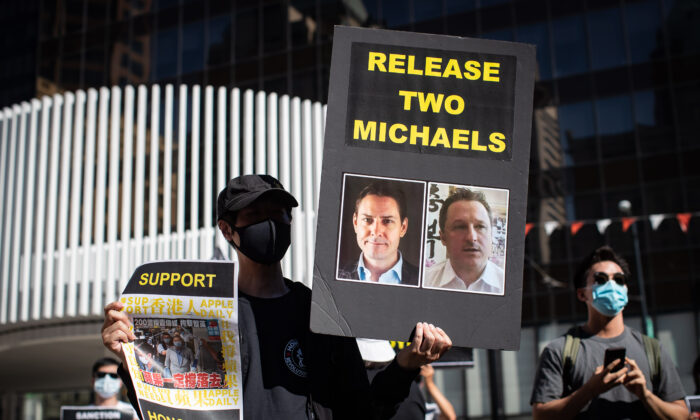 A person holds a sign with photographs of Michael Kovrig and Michael Spavor, who have been detained in China since Dec. 10, 2018, as people gather for a rally in support of Hong Kong democracy, in Vancouver on Aug. 16, 2020. (The Canadian Press/Darryl Dyck)
Canada

As ‘Two Michaels’ Mark 2 Years in Detention, Dissident Shares Hardest Part of His Own Captivity in China

Psychological torture and torment were a harsh reality for human rights activist Yang Jianli while held as a prisoner of conscience in China for five years. But the hardest thing to endure was not knowing how long it would all last.

“There were many worries, anxieties, and regrets. But the most difficult thing was that I had no idea how long I would stay there, a few days, weeks, years, or for the rest of my life,” said Yang, who holds two Ph.D.s in economics and mathematics from Harvard and Berkeley.

If Yang’s experience is any indication, Canadian citizens Michael Kovrig and Michael Spavor, who as of Dec. 10 have been held in detention in China for two years, are most likely suffering in the same way—no way of knowing when they’ll be released.

The “two Michaels,” as they are colloquially known, were detained in China in 2018 just days after Canada arrested Huawei executive Meng Wanzhou on an extradition request from the United States. This followed stark warnings by Beijing of dire consequences if Meng wasn’t released. Beijing has since signalled that the two would be released if Meng was let go, in effect pressuring Canada to renege on its judicial system.

Yang, who was active in the 1989 student democracy movement, had travelled to China from the United States in 2002 to help the labour movement with non-violent  strategies, but was arrested by the authorities.

He was kept in solitary confinement for nearly 15 months, during which time nobody knew of his whereabouts. He had no news from the outside world, no books to read or pen and paper to write, and no one to talk to except officials who conducted harsh interrogations, deliberately passing on false information such as saying his family members were being held in custody or were fatally ill.

“I could not but think the worst—that my family had already abandoned me and my friends had forgotten me. I was reduced to a basic, animal life,” Yang told The Epoch Times. “I relied on prayers, sometimes on an hourly basis, to sustain.”

Fearing he might lose his memory, he began to do brain exercises, trying to recall complicated English words he had learned in the past, and writing poems in his head.

Finally, thanks to pressure from the United States and the international community, Yang’s legal counsel was allowed to visit him in prison, and his solitary confinement ended. He was released in 2007 after enduring a five-year sentence, and returned to the United States where he has continued his democracy activism. He is now the president of the Washington-based Citizen Power Initiatives for China, a pro-democracy NGO he founded.

Kovrig, a think tank scholar and a former diplomat, and Spavor, a businessman, were kept in solitary confinement for the first six months of their detention, where they were interrogated for many hours a day. During this time, lights were kept on day and night, a form of sleep deprivation, which is recognized as psychological torture.

The two Canadians were only formally charged with espionage in June. The charge can be punishable by life in prison in China. A Chinese foreign ministry spokesperson said on Dec. 10 that the two had been “arrested, indicted, and tried,” but a Canadian official later said they have not undergone trial, adding that the Chinese side has confirmed that their spokesperson made a mistake.

Kovrig and Spavor were denied consular visits starting in January this year, with China saying all consular visits are on hold due to the pandemic. Canada’s ambassador to China Dominic Barton was allowed to speak to the two virtually in November.

Kovrig’s family has said he is completely isolated from the outside world. In an interview with The Globe and Mail, Kovrig’s wife said he passes the time by walking in his cell, reading books (he is allowed to have three books at a time), and writing letters during the few hours on a single day each month when he is allowed access to pen and paper.

In one letter to his wife, he wrote, “If there’s one faint silver lining to this Hell, it’s this: trauma carved caverns of psychological pain through my mind,” the Globe reported. “As I strive to heal and recover, I find myself filling those gulfs with a love for you and for life that is vast, deep and more profound and comforting than what I’ve ever experienced before.”

Spavor’s family hasn’t spoken to the media about his status. Barton told MPs this week that both men are “physically and mentally” healthy.

Others in Beijing’s Captivity

Kovrig and Spavor are but two of the many non-Chinese citizens, including other Canadians, who have experienced or continue to face imprisonment under China’s notorious judicial system.

Canadian couple Kevin and Julia Garratt suffered a similar fate in 2014 after Canada arrested Chinese national Su Bin on an extradition request from the United States. Julia was released in 2015, while Kevin was detained until 2016.

Several Canadians still remain in arbitrary detention in China. In 2017, Vancouver businesswoman Sun Qian was arrested in Beijing because she practises Falun Dafa, a traditional Chinese spiritual discipline persecuted by the communist regime. She was given an eight-year sentence in June.

Huseyin Celil, a Canadian citizen and Uyghur human rights activist, was abducted while visiting family in Uzbekistan in 2006 and brought to China, where he is still imprisoned. In 2016, John Chang and Allison Lu, Canadian winery owners, were charged with smuggling for allegedly mis-reporting the value of ice wine they export to China. Lu was released in 2017 but her passport was confiscated, while Chang still remains in prison.

Human rights activist Wang Bingzhang, who studied and lived with his family in Montreal, was abducted during a visit to Vietnam in 2002 and brought to China, where he has been sentenced to life in prison.

Peter Humphrey, a British expert on China and former reporter turned-fraud-investigator in China, was arrested with his wife in 2013 on allegations that he obtained data illegally, charges that Humphrey says are made up.  They were released in 2014.

“I was released when the regime realized it had caused me to develop cancer and they wanted to wash their hands of the crime they had committed against me,” Humphrey, who is now undergoing treatment for cancer, told The Epoch Times.

He says Spavor and Kovrig are suffering because of the Chinese regime’s campaign of “spite and bullying” against Canada.

“They were abducted, plain and simple, in a direct retaliation for the lawful detention of the accused fraudster Meng Wanzhou of Huawei in Canada,” he says.

Meng is accused of bank fraud in relation to violating U.S. sanctions on Iran.

Since her arrest, four other Canadians in China have received death sentences on drug charges.

Sheng Xue, a Chinese-Canadian author and democracy activist, says the Chinese Communist Party (CCP) is keeping Kovrig and Spavor in captivity to show the world that it’s a powerful regime that can get away with any egregious action.

She says in the face of such an attitude, a response based on weakness and appeasement won’t work.

“The CCP only believes in power. If Canada relents, the Chinese regime will ask for more and more,” she said.

In recent months, Ottawa adopted a seemingly tougher stance on China compared to the past, with Prime Minister Justin Trudeau saying his government will not stop standing up for human rights in China and calling out Beijing for its “coercive diplomacy.”

In addition, Foreign Affairs Minister Francois-Philippe Champagne had pledged to release a new framework for Canada-China policy by year end, saying a new approach to China is needed.

Last month, however, Champagne appeared to back off from the framework, saying the policy is “evolving.” He also told the parliamentary Canada-China relations committee that Canada should avoid tough talk on China.

Sheng says the whole world has been “soft” on China for decades, with the result being that the Beijing regime has become “the most aggressive power in the world.”

“If Canada keeps the strategy of being soft and just talks, the only change that we will see is that China will be even more belligerent,” she says.

Yang says the global winds are changing for China, as several democratic countries are openly defying the threat of commercial retaliation from the regime and speaking out against its rights abuses.

“I see a window of opportunity for democracies to form a ‘treaty-based human rights-economic NATO’ to confront China,” he said. “I hope Canada and the United States can work closely, as the first joint human rights project of the major democracies, to save the two Michaels, and Dr. Wang Bingzhang.”