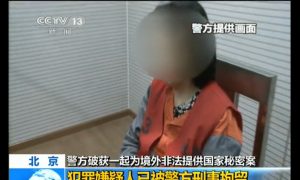 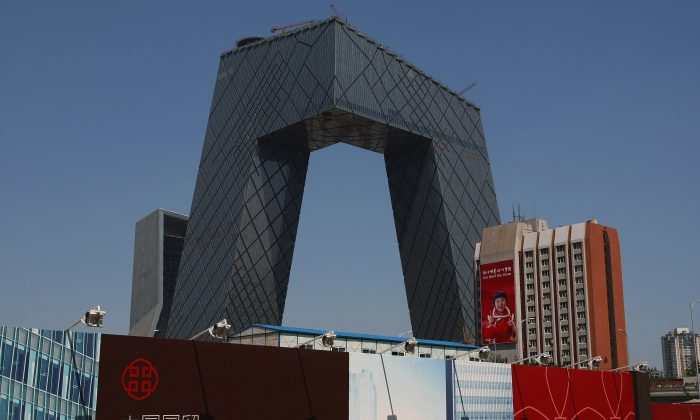 A general view of the new headquarters of China Central Television under construction at the Central Business District in Beijing, China, on Aug. 22, 2008. (Andrew Wong/Getty Images)
China Human Rights

LONDON—Chinese state television channel CCTV is under fire for broadcasting what campaigners call “clear lies” in the UK, and it could face similar charges in the United States.

The NGO says the broadcasts amount to “known and intentional distortion of facts and clear lies,” which violate Ofcom’s rules on impartiality and accuracy.

The complaint was made on behalf of four victims, two of whom are of Chinese descent: Angela Gui, daughter of detained Swedish book publisher Gui Minhai, and Lam Wing-Kee, who sold books in Hong Kong that were critical of the Chinese communist regime.

The other two are Swedish national Peter Dahlin and British ex-journalist Peter Humphrey, who both say they were forced to read out statements that had been prepared by police.

None of them were formally arrested or charged when the “confessions” were broadcast. They were instead kept in “residential surveillance at a designated location,” or what the UN calls “enforced disappearances.”

Humphrey ran a corporate due diligence firm in China that the Chinese state alleged had bought and sold personal data, charges that Humphrey said are false.

In the submission, Humphrey said he was drugged, secured to a metal chair, and then placed inside a small cage.

“CCTV journalists then aimed their cameras at me and recorded me reading out the answers already prepared for me by the police. No questions were asked,” he said.

Dahlin was the co-founder of a group that provided support to lawyers in China. The Chinese regime alleged he had violated national security, but he was never brought before a court to face charges.

He says he was also forced to read prepared statements, which were then presented as facts in CCTV broadcasts.

“All statements made by Peter Dahlin were known by CCTV to be made under duress,” the submission to Ofcom says. “The cameraman and the journalist both were aware that he was kept in a facility for investigation, and were aware that his answers were pre-scripted.”

Gui Minhai hasn’t been seen since his forced confession was aired on CCTV in 2016, in which he was made to say he returned to China to voluntarily turn himself in for a 2003 traffic violation.

Eight days after Gui Minhai disappeared, Lam Wing-Kee was taken and blindfolded when crossing the border from Hong Kong into China.

After six months in detention, he was released on bail, but not before several videos were recorded.

“The videos recorded of me were then used by CCTV, with significant post-production, and aired, without any consent ever given, with the clear aim of defaming and attacking me,” he said in the submission.

The broadcasts took place between 2013 and 2018, and although the submission focuses on just seven, it lists many other “forced TV confessions” that have also been aired.

A spokesperson for Ofcom said that if they find a breach in the code could have occurred, an investigation could be opened within 15 days.

If CCTV has been found to breach the Broadcasting Code, the regulator may fine the channel, ask them not to rebroadcast the program, or require the channel to broadcast their judgment. In the most serious breaches, Ofcom can revoke a channel’s license.

Safeguard Defenders also intends to raise its concerns regarding CCTV with the Federal Communications Commission (FCC) in the United States in April.

It’s not the first time the British regulator has been asked to step in regarding foreign television networks.

In 2012, the Iranian channel Press TV had its license revoked after the network broadcast an interview with imprisoned journalist Maziar Bahari.

Ofcom ruled that the interview had been conducted under duress and fined the channel 100,000 pounds. But Press TV was “unwilling and unable to pay,” according to Ofcom.

In December 2018, Russian channel RT, formally known as Russia Today, was found to have breached impartiality rules over seven broadcasts related to the 2018 poisonings of Sergei Skripal and his daughter, Yulia.

RT said that it was “reviewing the findings Ofcom has put forward” and would decide on its next steps.