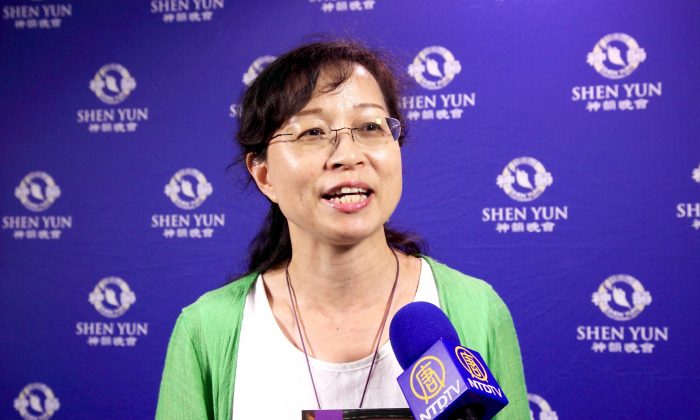 TAOYUAN, Taiwan—The atmosphere and the audience response at the conclusion of two-hour long music and singing spoke well of the popularity of the New York-based company, Shen Yun, in Taiwan.

The eruption in cheers and shouts of “encore, encore,” the deafening applause, the three encore music pieces, and Milen Nachev, the conductor of the symphony orchestra, taking several bows and paying tribute to those in audience—these lasted almost 15 minutes. And then there was the huge crowd waiting for autographs from four musicians and Nachev.

“The encore pieces elevated the audience’s emotion to a new height,” said Mao Pei-rong, conductor for Taoyuan Yueh-Yo Chinese Chamber Orchestra, who was among the jubilant full-capacity crowd at Zhongli Arts Hall, where Shen Yun Symphony Orchestra made its debut in Taiwan on Sept. 17.

“I don’t think it takes much advertising for a Shen Yun concert. [Shen Yun] has earned a reputation on its own. And people look forward to its music,” said Ms. Mao, adding that she had previously seen Shen Yun Performing Arts.

The symphony orchestra is part of Shen Yun Performing Arts, a dance company that tours the world every year since its establishment in 2006. This year, however, is the first time that the orchestra has traveled outside of North America.

As a professional conductor, Ms. Mao knows the different elements that make up a good orchestra, which was why she was blown away by what she heard.

“The most difficult part about an orchestra is about fusion of the different sounds, and Shen Yun Symphony Orchestra gave me the feeling that its different sounds were fused together,” Ms. Mao said.

To be able to achieve this good fusion, Ms. Mao explained, every musician would need to put aside his or her own character and just simply follow the conductor. In other words, musicians needed to be able to completely follow a conductor‘s interpretation of the music, and this was exceptionally difficult for an orchestra with 50 to 60 musicians.

And the orchestra produced great melodies, according to Ms. Mao.

“The melodies gave me, my soul, a powerful sensation, an emotional sensation that the music conveys to us how the universe is part of our everyday life.”

Where East Meets the West

“I think the most challenging part lies with the composers, about how they blend the Chinese instruments with a Western symphony orchestra,” said Ms. Mao, who would like to give kudos to the composers’ professionalism.

Shen Yun’s conductor, said Ms. Mao, also played a critical role in delivering this music to the audience. “It was great that the [conductor] could interpret the timbre of the Chinese instruments and the technical skills of their playing.”

“The conductor had great control over the different sounds of the orchestra,” said Ms. Mao.

Ms. Mao said she was glad she came to see the performance, as she walked away feeling greatly inspired.

“I believe the creativity behind this performance is very different,” said Ms. Mao. “There is a traditional element behind the performance, and [Shen Yun] is promoting this tradition.”

One of the missions of Shen Yun Symphony Orchestra is to revive the ancient traditional Chinese culture, which is nearly lost in modern-day China. One part entails that the original Chinese compositions try to convey ancient moral values.

“[The orchestra] has made a stride forward with this combination of creativity and tradition.”

According to Ms. Mao, the piece that best illustrated her point was “Drums of the Grassland,” which, with its traditional element, gave her a sense of comfort and familiarity.

She tried to sum up in words why she was touched and inspired. “The music is touching to people because the melodies have a strong affinity, and people get touched because of it.”

“And your soul follows it and the melodies stay in your mind, making you feel very comfortable,” said Ms. Mao.

Before leaving, she expressed her desire to see the symphony orchestra put on more performances in Taiwan, for it would “purify people’s hearts” and “make changes in society.”