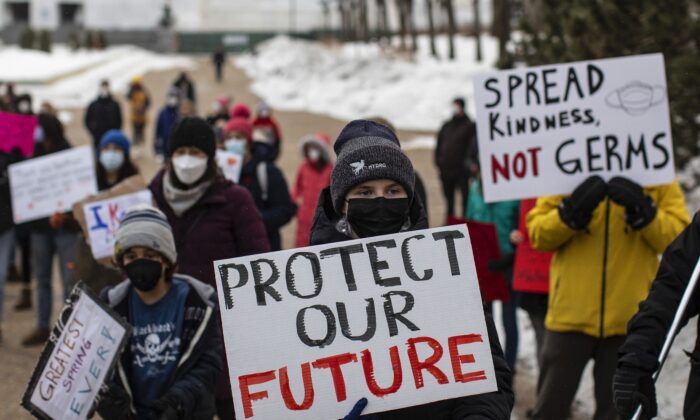 Protesters show support for students, teachers, and health-care professionals at the Alberta legislature after students walked out of their classrooms to protest the government's decision to lift a mask mandate in schools, in Edmonton on Feb. 14, 2021. (The Canadian Press/Jason Franson)
Viewpoints

As Restrictions Continue to Be Lifted, the COVID-Zero Crowd Don’t Want to Let Go

Most mask mandates in Ontario were lifted on March 21, with the exception of places such as public transit, retirement homes, and shelters. In his statement announcing the move, Premier Ford described the day as an “important milestone in our fight with COVID” and thanked Ontarians for their “hard work, sacrifice, and willingness to rise to the occasion.”

Indeed, this is a milestone, as what was for much of the pandemic the most restricted jurisdiction in North America is acknowledging that it is finally time to move on from the pandemic and is, so far, sticking to that plan despite the inevitable outrage from those who are dominated by their COVID obsession.

Though Ontarians can rejoice in the return to something resembling pre-pandemic normalcy, it is clear that we will also be entering a new phase of lunacy courtesy of the COVID-Zero faction.

Footage captured from Queen’s Park on March 21 as members returned after the mandate came to an end demonstrate this dynamic quite well. The majority of those in the Ford government were not wearing a mask, while all the opposition members were wearing them and making it known that they were, at least when the cameras were on, not going to go along with the government’s move.

Undoubtedly, as the mandates are removed, things such as masks are going to be mercilessly deployed as a battering ram in a culture war. And will be amplified as yet another way to define one’s political identity.

In a piece published in the Atlantic last May titled “The Liberals Who Can’t Quit Lockdown,” American writer Emma Green argued that for many of a liberal persuasion, “diligence against COVID remains an expression of political identity—even when that means overestimating the disease’s risk or setting limits far more strict than what public-health guidelines permit.” Green also documented instances of well-to-do, liberal-minded women being shamed and even accused of promoting “white supremacy” by rabid COVID obsessives for simply arguing for lifting restrictions.

Similar conduct is seen among the COVID-Zero crowd in Canada who are evidently addicted to the platform COVID has provided to them. Prominent doctors have stigmatized children and shamed teachers who choose not to mask at school, and have expressed sentiments to the effect that those who don’t mask are indicating that they don’t care about the community and should be treated as such. Nili Kaplan-Myrth, a family doctor and COVID-Zero proponent, has accused the Ford government of racism, classism, and ableism for moving on the mask mandate, with no explanation as to how these labels apply.

Though continuing to claim their absolute fidelity to the science, they still show no interest whatsoever in having an honest debate about the science as it evolves. For if they did, they would have to honestly contend with other experts who have claimed in recent weeks that despite any concern over possible new variants, with vaccines and better tools, Canada is unlikely to experience another significant wave. To add to the laundry list of reasons why their panic is more so a cultish neurosis than prudent caution, news continues to establish that the lethality of COVID is not as high as initially understood and needed to be more contextualized throughout the pandemic.

As recent documents released by the Ontario government divulged, the number of reported deaths as a result of COVID is actually lower, going down to under 60 percent from the initial 75 percent of the numbers previously reported. Moreover, the documents also state that “with the very high Omicron case counts, some people with COVID-19 infection were dying from causes unrelated to their COVID-19 infection.”

Though it proved very contagious, the Omicron wave also saw concern drastically decrease among Canadians as more people knew someone who was infected and didn’t have an overly problematic experience. The nail in the coffin, too, is that the Ford government’s moves to “learn to live with COVID” are in line with a majority of Ontarians, with a new Angus Reid poll concluding that 60 percent support the process of lifting restrictions and mandates.

As we continue to venture into the post-pandemic phase, the politicization of the pandemic will intensify as unhinged politicians and public health officials try to desperately hold on to the relevancy they enjoyed during the pandemic. It might get them some applause within their online echo chamber, but most Canadians are ready to live again, and should be able to do so if they choose to.