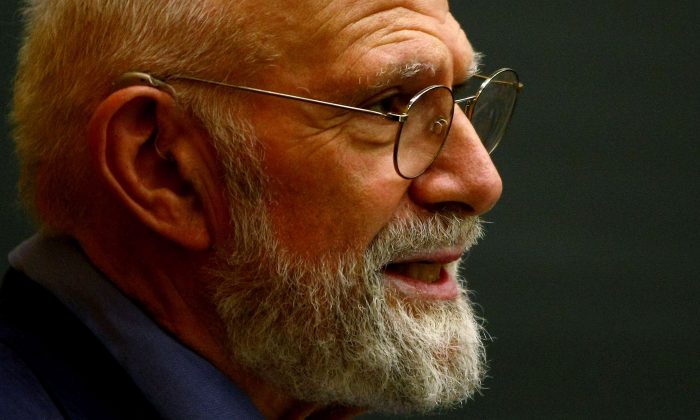 As Oliver Sacks Faces Terminal Cancer, We Reflect on the Impact of His Life

Neurologist Oliver Sacks has made startling and fantastic discoveries about how the human brain works by daring to challenge conventional notions. He has brought clinical case studies to the public in vivid narration, merging literary sensibility and medical precision—highlighting a human connection to the minds he’s studied.

“Over the last few days, I have been able to see my life as from a great altitude, as a sort of landscape, and with a deepening sense of the connection of all its parts,” he wrote in an essay for the New York Times published Feb. 19. At the age of 81, Sacks has learned he has multiple metastases in the liver, a fatal condition. He wrote the essay to reflect on his life and pending death, reflections we may experience in more depth when his autobiography is published this spring.

“I cannot pretend I am without fear. But my predominant feeling is one of gratitude,” he wrote. “I have loved and been loved; I have been given much and I have given something in return; I have read and traveled and thought and written. I have had an intercourse with the world, the special intercourse of writers and readers.” Though he feels some detachment from life, he is not finished living. He intends to deepen his friendships, write, travel, and spend final moments with those he loves. But he will not read about politics or the problems of the world. Though he remains concerned about them, “these are no longer my business; they belong to the future,” he said.

“I rejoice when I meet gifted young people,” he said. “I feel the future is in good hands.”

When Sacks was himself a gifted young person, he faced opposition from some of the established experts of the time.

When Sacks was himself a gifted young person, he faced opposition from some of the established experts of the time.

He was a bit unconventional, to be sure. In 1961, he was a consulting physician for the Hell’s Angels in California, according to Steve Silberman, who wrote a captivating biographical article about Sacks about 13 years ago. Sacks also drew on his LSD experiences and visions to relate to his migraine patients’ ability to see auras.

When he delved into the literature on migraine symptoms he had observed in his patients, he found the relevant writings buried in the past. He turned to a book by Victorian physician Edward Liveing. In a fit of inspiration in 1967, Sacks wrote his first book, “Migraine,” in nine days—and was then faced with the threat of total ruin if he published it.

When he showed his manuscript to Arnold Friedman, the chief neurologist at Montefiore Hospital in the Bronx, N.Y., where Sacks was employed at the time, Friedman was outraged. Friedman said Sacks—a mere employee—had no right to publish a book, and any ideas Sacks had belonged to him, Friedman, as chief neurologist. Furthermore, Friedman would ensure Sacks would never again find employment as a neurologist in America if the book were published.

Opposition and success again mingled in what would become one of Sacks’s most famous works, “Awakenings.” This book was made into a movie in 1990 starring Robin Williams and Robert DeNiro.

Unable to do much more than stare vapidly into space and pass into old age, his patients began to move, talk, and even dance when he gave them the experimental drug levodopa.

Sacks revived men and women who had been catatonic for decades. Unable to do much more than stare vapidly into space and pass into old age, his patients began to move, talk, and even dance when he gave them the experimental drug levodopa (“L-dopa”). Unfortunately, however, the patients eventually began to experience tics and seizures from the medication.

Silberman wrote of the icy response to Sacks’s discoveries: “Sacks’ reports were greeted with silence at first, and then with sharp criticism. His experimental methods were questioned, and his accounts were criticized by a colleague at Stanford for reporting ‘”adverse” effects of levodopa that are at variance with most clinical reports.'”

The tics and seizures again had Sacks delving into forgotten medical literature. Tourette’s syndrome was considered a possibly fictitious disease at the time, and he had to go back to Gilles de la Tourette’s writings of the 1880s for information on these related symptoms. The rigid methods of diagnosis in the 20th century made it difficult for Tourette’s to be recognized, explained Silberman. The symptoms didn’t fit into the charts and graphs of the time.

Sacks helped develop the “romantic science” of Russian neurologist Aleksandr Luria. Inspired by Luria, Sacks combined the narrowed focus of neurology on regions of the brain and neurons with the description of phenomena and intuition that allows the neurologist to understand the whole system.

“Sacks made patients the heroes of his case studies, rescuing the clinical anecdote from the margins of medical practice,” Silberman wrote.

Noted for a lack of human feeling in the work of his youth, Sacks learned to excel in seeing and highlighting the humanity of his patients.

Throughout his career, he has investigated fascinating phenomena, including synesthesia (a condition in which the senses are intermingled, so that one may taste the color blue, for example), and “musicophilia” (the ways in which the brain interacts with music).

He found that people who have lost the ability to speak, for example, are often able to sing. “The past which is not recoverable in any other way, it’s sort of embedded as if in amber in the music and people can regain a sense of identity, at least for a while,” he said in a video posted on his website.

His life has been a rich and productive one, and his final days are sure to be the same. He wrote in his essay: “It is up to me now to choose how to live out the months that remain to me. I have to live in the richest, deepest, most productive way I can.”