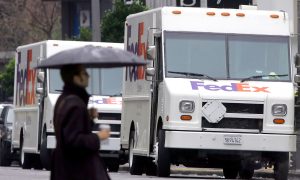 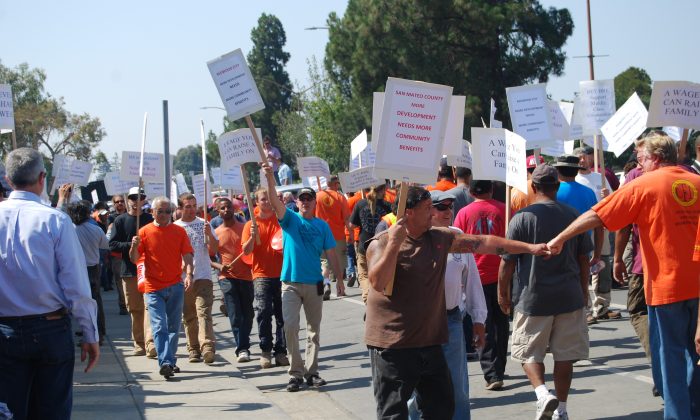 CITY, Calif.—The huge wave of development all over the Bay Area has been no surprise given the upward trend the real estate industry has seen in the past half year, but communities are worried that these developers are only taking without giving back. According to the Association of Bay Area Governments, this trend of development is only going to continue.

Over 350 people rallied in Redwood City Tuesday in front of BRE Properties’ 264-unit apartment complex under construction, to protest for “wage equality.”

To date, BRE president Connie Moore has not responded to the unions’ requests and inquiries. Recently, 77 county supervisors and Redwood City Council Members signed a letter to Moore expressing concerns that the construction workers are not receiving benefits or a living wage.

“We can’t compete with their low wages because our whole package is about $200 per hour. These guys here are getting paid $12,” says Kyle Richey, a member of SMW 104.

According to community leaders, elected officials have played a large part in the effort to communicate with developers, and legislation will follow.

“It’s vitally important that us, as policy makers, regardless of city, realize that we have an important responsibility to help give birth to these community benefits programs,” said County Supervisor Warren Slocum. “Development should contribute amenities to further greater the communities, development should offer a diversity of housing stock, and not just be for the wealthy.”

State Senator Jerry Hill spoke at the rally as well, promising to address the issue in the State Senate if necessary.

“We need to provide for those who live here at all levels,” Hill said. “How can you expect people to pay the price of these properties and not be able to earn a living to pay for that? You can’t expect that, it can’t be done, and it’s not right.”

The legislation that provided the opportunities for these infill housing developments was SB 375, the Sustainable Communities and Climate Protection Act of 2008 put forth by the California Air Resources Board, says Hill. According to Hill, the target is to reduce greenhouses gases, but if the people who work in Redwood City don’t live there and the people who live there can’t work there, changes need to be implemented.

“That’s the incentive, that’s why we want this to come together—but it’s not, as long as we don’t provide for the working men and women of this community, and we’re not doing that today,” Hill said.

Rallies in other cities around the Bay Area are to be scheduled and have already been held in Sunnyvale and San Francisco.