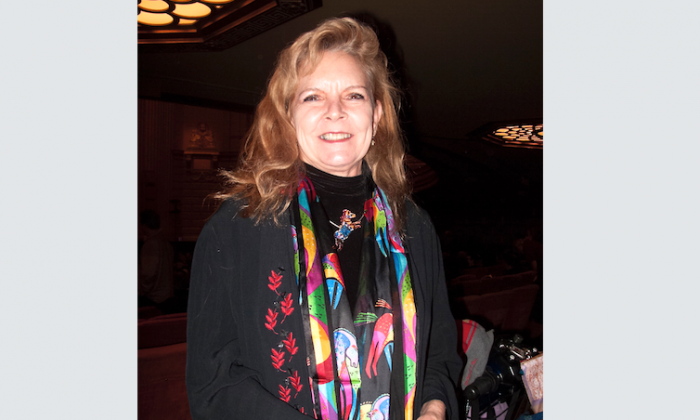 Artist Sees Joy in Shen Yun Use of Color

SAN FRANCISCO—Artist Patricia Rusich has been working on a piece including dance, and found inspiration in Shen Yun Performing Arts at the War Memorial Opera House in San Francisco, Jan. 11.

“It’s like almost every act has flowing silk and flowing fabric,” Ms. Rusich said of New York-based Shen Yun’s costumes. The flowing colors of the dancers’ costumes made Ms. Rusich think of her own piece, where flowing veils are meant to give audience members a sense of joy and movement.

The classical Chinese dance Ms. Rusich saw is nothing like her own work, she said, but she still drew ideas for her work, The Dance of Positivity being uplifted by Shen Yun.

Dance is part of human culture, as Shen Yun’s website states, and art is meant to uplift. Established in 2006, Shen Yun’s artists came from all around the globe to revive 5,000 years of Chinese civilization through the performing arts.

“I think as an artist, I see the whole set and the beauty of the set,” Ms. Rusich said.

Brilliant costumes and a digital background come together to take the audience on a journey through the dynasties, helping tell stories like the tale of Ne Zha and the dragon.

Ms. Rusich had been impressed seeing the digital backdrop in action during that particular piece, drawing ideas from the movement of the water and the dancers moving from screen to stage.

“I thought it was really impressive,” Ms. Rusich said. “I love the interaction of the video behind the stage and the merging of the graphics and the people.”

“I love them all,” Ms. Rusich said of the dances.