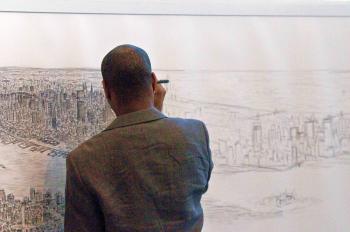 NEW YORK—No photos, no rulers, and no erasers, just a man, a pen, and an 18-foot canvas. At the Pratt Institute on Monday, renowned artist Stephen Wiltshire began filling in an enormous panoramic sketch he created that depicts all of Manhattan, as well as parts of Brooklyn and New Jersey.

Following a 45-minute helicopter ride, Wiltshire made the entire sketch last Friday at the Juliana Curran Terian Design Center of Pratt, in Brooklyn. The artist is now going over it in fine detail with plans to have it completed by Friday.

“I love New York, the busy streets, rush hour, the chaos, yellow taxis and the high rise buildings reaching up to the sky,” said Wiltshire, according to a Pratt release.

Like Dustin Hoffman’s character in the movie “Rain Man,” Wiltshire is autistic and displays an unusually powerful photographic memory that he has applied to rendering cityscapes.

Asked if he likes sports, Wiltshire responded, “I don’t like sports forever.”

According to his biography, “It soon became apparent that he communicated with the world through the language of drawing; first animals, then London buses, and finally buildings.”

He only learned to speak after his teachers temporarily took away his art supplies in order to encourage him.

The New York panorama will complete Wiltshire’s collection of nine works depicting some of the world’s most iconic cities—London, Tokyo, Hong Kong, Rome Madrid, Frankfurt, Dubai, and Jerusalem. He toured the United States three times in the early 90s and his fourth book “American Dreams” was based on his love of American architecture.

The New York panorama marks Wiltshire’s last cityscape. After this piece is completed, he said he will pursue drawing individual buildings.

He has been featured twice in the list of the 100 most influential black people in Britain.