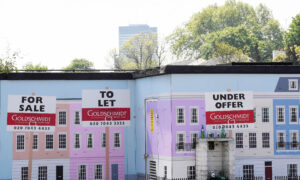 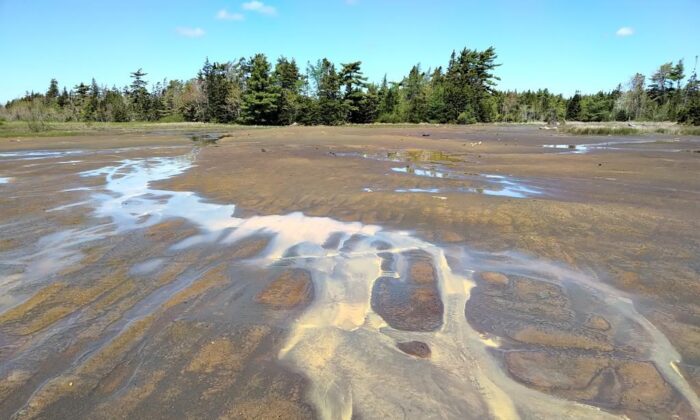 Runoff is seen at a historical tailing area, which drains towards the brook that feeds into Lake Charles, at the Montague mine site near Halifax, in a June 2019 handout photo. Findings from a study describing the arsenic legacy left in lake-bottom sediments near an abandoned Halifax gold mine are setting off alarm bells for a senior cancer researcher. (HO-Saint Mary's University Department Of Environmental Science, Linda Campbell, *Mandatory Credit* / The Canadian Press)
Canada

HALIFAX—Findings from a study describing the arsenic legacy left in lake−bottom sediments near an abandoned Halifax gold mine are setting off alarm bells for a senior cancer researcher.

A paper published Monday in the journal Science of the Total Environment says a dated core sample taken from the bottom of Lake Charles discovered arsenic at 4,960 milligrams per kilogram, more than 280 times higher than levels “where biological harm is expected.”

The site is downstream from the historic Montague mines, where successive gold rushes saw the creation of 121,000 tonnes of arsenic-rich tailings between the 1860s and 1940.

Not only are the carcinogen’ levels high, the sample suggests the arsenic in sediments at the lake’s deepest point is actually rising closer to the water itself.

Joshua Kurek, an environmental scientist at Mount Allison University in Sackville, N.B., and one of the study’s co-authors, said in a recent interview the proximity of the arsenic to the lake water after so much time was unexpected.

“We tend to think of sediments at the bottom of a lake as a sink for a lot of materials … but here’s a case where the pollutants from mining that ended 80 years ago are slowly moving up the core and are getting closer to the sediment-water boundary,” he said.

“If environmental conditions at the bottom of Lake Charles change, what can happen is some of those contaminants that were locked into the sediments can be released into the water column.”

The popular swimming and boating lake on the outskirts of Halifax already has high levels of arsenic at 11 micrograms per litre, double the Canadian water quality guidelines for the protection of aquatic life and higher than 50 other lakes in the region, according to federal Fisheries Department data.

In a province full of abandoned mine sites, the journal article raised concerns for Dr. Graham Dellaire, the director of research in Dalhousie University medical school’s department of pathology.

The Halifax-based researcher is leading a national team of experts looking at carcinogens that affect people’s risk of getting cancer.

He said in an interview last week that while the public has often heard the message on the carcinogenic risk of being exposed to radon, many remain unaware of the risks of long-term exposure to arsenic and its links to various cancers.

“as the arsenic and mercury levels increase from this sediment, there could be increased risk of skin cancer from swimming and playing in the water,” he said after reading the Lake Charles study.

Dellaire is attempting to start awareness campaigns on arsenic, and he’s seeking funding to provide information to areas where there is high risk for contamination, such as areas downstream from abandoned gold sites.

He said the program would test well water and invite people to screen for personal arsenic exposure through sampling of their toenails.

“The ghost of our mining past is coming back,” he said.

Kurek said the upward migration of the arsenic in Lake Charles may be tied into urban influences on the body of water.

The expert in freshwater ecosystems suggests with nutrients such as fertilizer flowing in from surrounding properties, there are biological processes that can deplete oxygen in the deeper reaches, and this chemical change in the water appears to be related to the rise of arsenic.

Warming water and other climate change impacts could also be playing a role, potentially speeding the chemical processes that deplete oxygen in the lake, he added.

The Lake Charles research comes about a year after another study suggesting more work is needed to know the impact of arsenic and mercury on plants, fungi, invertebrates, mollusks, fish and mammals in Nova Scotia’s historic gold mining areas.

A 2020 paper published in the journal Environmental Reviews found only 18 of the 64 gold districts in Nova Scotia have been analyzed for mercury and arsenic accumulation in various forms of life.

In July 2019, the provincial government announced it was spending $48 million to clean up the Montague site and the Goldenville site in Guysborough County. Overall, it said it was looking at a list of 69 abandoned mining sites, including 24 gold mines, on Crown land in order to determine which ones needed containment or other work.

This came the same year the province’s auditor general issued a report concluding the province hasn’t sufficiently investigated potential contamination at many abandoned mine sites, meaning there could be unknown future tolls on the government’s finances.

During a legislative committee hearing last month, Donnie Burke, executive director of Nova Scotia Lands, said remediation work at the Montague site is expected to start by the next fiscal year.

Allison Clark, the lead author on the most recent paper, completed the work while finishing her thesis at Mount Allison’s department of biology.

“I believe our study is a call to action to work on remediation efforts of the tailing sites,” she said.

Linda Campbell, a professor of environmental science at Saint Mary’s University and another co-author, said in an interview that arsenic is an element that will remain in an ecosystem for a “very, very long time.”

She said the first step to remediation of the contaminated sites is to “stop the mobility of the (gold) tailing materials themselves,” at Montague and other sites.