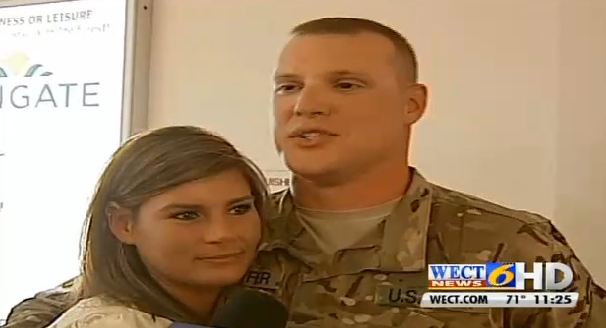 Specialist Larry Shaffer and his wife Misty. (Screenshot/WECT-TV)
US

Army wife loses 150 pounds: A man deployed in Afghanistan was welcomed home by his wife, and was surprised twice.

Misty Shaffer hadn’t seen her husband for over a year, and kept pictures of herself in full figure out of sight of her husband Larry while he was deployed.

When he got back he was surprised by her 150-pound weight loss.

“It’s just icing on the cake,” he said, “because I mean I’ve been happy with the way she’s looked since day one, but it’s something she wanted to do and she reached her goal.”

“I just kept pictures off Facebook, off the internet,” Misty told WECT-TV, a local broadcaster in Wilmington, North Carolina. “When I did send him pictures, they were from the shoulder up.”

Larry Shaffer’s other surprise was that Misty bought a new house for them.