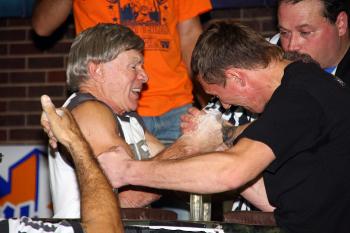 By Sara Matheson
Print
NEW YORK—Huge forearms, triceps and biceps, contorted faces and howling grunts, these were all part of the scene at Port Authority Bus Station on Thursday.

More than 100 men and woman vied for a share of the $5000 prize money at the 31st Annual White Castle Empire State Golden Arm Tournament of Champions.

Founder of the New York Arm Wrestling Association Gene Camp said the contest had attracted some of the big names, including world champions Travis Bagent from West Virginia and Jerry Cadorette from Massachusetts.

“It’s not what more people perceive as a barroom grudge-match between macho muscle men, which it isn’t. This stuff is for real,” Camp said.

“You know they come here and they have been practicing hard for this. They practice on their arms they work out everyday. And most of them don’t drink,” he said.

Charles Link from Yonkers has been professionally wrestling for three years and has won about 30 competitions.

“People think it’s just a big bar room thing when its about knowing how to arm wrestle. There is more to it than just going in there screaming.

“It’s not a big meat-head sport. There are guys that are skinny that work on their technique and speed that can take somebody’s hand away,” the 33-year-old said.

Sixty-eight-year-old Norm Devio from Massachusetts was a physical education teacher before he started arm wrestling.

“I do a lot of pull-ups and I have some arm bands and stuff like that…I like staying in shape,” Mr Devio said.

The New York Arm Wrestling Association (NYAWA) was founded and officially established in 1977 by its president Gene Camp.

The NYAWA is a registered not-for-profit sports organization, dedicated to the regional promotion of arm wrestling in New York for more than 31 years.