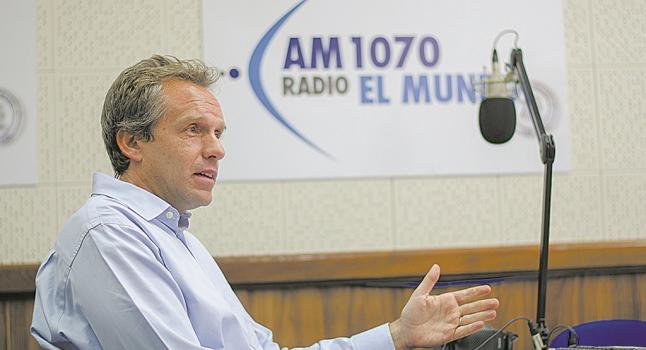 According to economy journalist Pablo Wende, if Argentina solves the holdouts issue, it could get international financing with reasonable rates. (Daniel Musa/Epoch Times)
Americas

Pablo Wende analyzes the delicate time of Argentine economy and its near future
By Miguel A. Díaz

BUENOS AIRES—Argentine journalist and economist Pablo Wende received the Epoch Times to discuss the particular time of Argentine economy. The director of Bank Magazine, which is a reference publication for the Argentine financial sector, explained how to solve the debt of holdouts, the consequences of not reaching an agreement, and the economic scenario that the next government will inherit, among other topics relevant to the country.

The Sooner You Fix It, the Better

ET: One notices that a default does not suit the government nor the holdouts, what do you think about it?

PW: Even if the government says there is no default, the fact is that they paid the money, but the bondholders did not get it. Today there are 539 million dollars that were not paid. So, from that point of view, the default does not measure whether the one who fulfilled the obligation actually paid, but whether the holder of the title received the money.

Now, let’s discuss the issue of judge Griesa’s ruling, who is being criticized for being, say, very far  from the financial practices and the American legal system in general. But the fact is that Griesa’s verdict was confirmed not only by him, but by three judges in higher courts of the United States Federal Court (they did not remove one single comma). And the Supreme Court, following a request from Argentina, refused to study the ruling, which was tacitly confirming everything Griesa had said at the time.

ET: What do you think the government should do?

PW: I think the government should enforce the verdict. Although the government does not like it, because it lost, and the sentence is debatable (I think it has weak points), there is no other choice. The longer it takes to enforce the ruling, the greater the impact will be from the economic point of view.

Uncertainty must be removed from Argentine economy, while the holdouts issue just increases it; the sooner you take it off, the better. What needs to be done, is checking if this debt can be paid in long-term bonds, as in Repsol’s case. The holdouts have already confirmed this.

ET: One could see that the country was on track to access the international credit market. Do you think that the government will insist in that direction, or will continue financing the fiscal deficit by issuing titles?

PW: Argentina has a lot of urgency to regain access to financial markets. I mean, this whole issue of debt relief made that the maturities of the bonds were paid with reserves [savings]. But this mechanism depleted, because there are no sufficient reserves to continue paying this way. So, since the end of last year, after the changing of the Minister, there was also a change in the approach. It was considered that Argentina should get access to financial markets, which is a right approach and interpretation.

That’s why there were arrangements with Repsol, CIADI, and the Paris Club, in order to access financial markets. If Argentina fails to solve the holdouts issue, falls into default, and all the track it had traced since late last year, it would be left completely aside or forgotten.

If a settlement  is reached with the holdouts, Argentina will regain access to markets with quite reasonable rates, I think. That is, if Argentina reaches an agreement, it can easily get rates of 6% ​​per annum.

If no settlement is achieved, it will remain outside the markets, and therefore will have more exchange restrictions. That is, very few dollars will come in, and it will have many more problems, because it will have to issue pesos. And, if this keeps going on for some time, there would be more pressure on the exchange. This aspect can not be downplayed.

ET: How do you see the Argentine economy by the end of the year?

PW: It depends on how the holdouts issue ends. I think that if Argentina regains access to markets, maybe we won’t see a recovery of the economy, but we might have some relief, and maybe a floor to fall over. And after 2015 a recovery may come. If the holdouts issue is not solved, we will see a deeper fall.

ET: There are presidential elections next year, what economy will the next government inherit?

PW: I think it will be an economy with a bitter activity level, with a level of virtually zero foreign investment, and with little reinvestment of profits in the domestic market.

So what the next government should do, is to restore confidence, and create a better climate for investment. If that happens, you will have capital investments because there are many interesting areas in Argentina with good potential; and it will also receive financial investments.

So the prospect of political change, and the arrival of a new government can encourage this change of view on investors. But the road is long, that is, I see how the following 500 days left are downplayed, and it is a long time. Because if you hand the country in default, with less than 15,000 million dollars in reserves, distortions in rates, consumption falling … The deterioration from now  until the new government taking power, may be big, and then the recovery will also be more expensive. (…) One believes that a new government will have another type of discourse, and another kind of approach, but there won’t be a magical recovery.