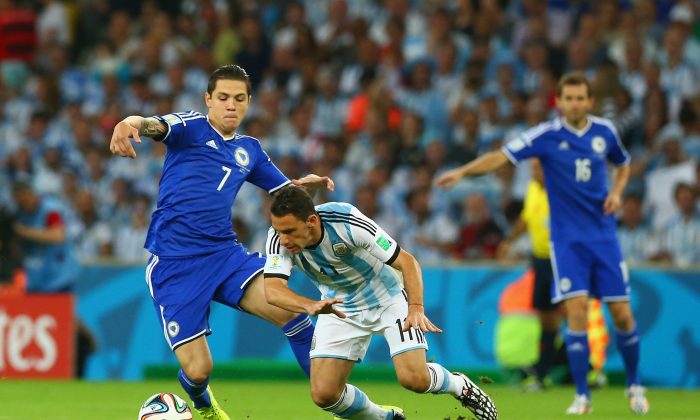 The 0-0 count quickly vanished in the Argentina vs Bosnia game on Sunday with an own goal by Bosnia in the opening minutes.

Lionel Messi hit a cross off a free kick, leading to a header by a teammate.

The ball then hit off of Bosnia defender Sead Kolasinac’s foot and into the goal.

The first half in general other than that goal was pretty even, with Bosnia more than holding its own.

Bosnia nearly had a goal late in the first half, with a nice header off a corner kick, but Argentina goalie Sergio Romero made the save.

Messi didn’t look too good so far, although one opportunity he created in the penalty box nearly yielded another goal.

Hoewver, he came on in the second half and knocked a ball into the net to put Argentina up 2-0.

But 84 minutes in, Vedad Ibišević scored to put Bosnia on the board.

It was also Bosnia’s first ever World Cup goal.

Bosnia failed to get an equalizer, with Argentina getting closer to getting a third goal than Bosnia to a second.

RIO DE JANEIRO—Lionel Messi scored a stunning second-half goal to push staggeringArgentina to a 2-1 victory over Bosnia Sunday at the Maracana in the Group F opener for both teams.

Messi lifted Argentina in the 65th minute, moving in from the right and striking a low left-footed shot off the inside of the post behind Bosnian keeper Asmir Begovic. It was Messi’s second World Cup goal, adding to one he scored eight years ago in Germany.

Vedad Ibisevic scored a close-in goal in the 85th to give Bosnia hope.

Argentina took a 1-0 lead in the third minute on an own-goal by defender Sead Kolasinac. For the remainder of the half, Argentina showed little with Messi seldom touching the ball and Bosnia — a World Cup debutant — looking more threatening.