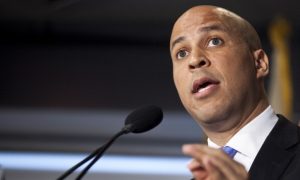 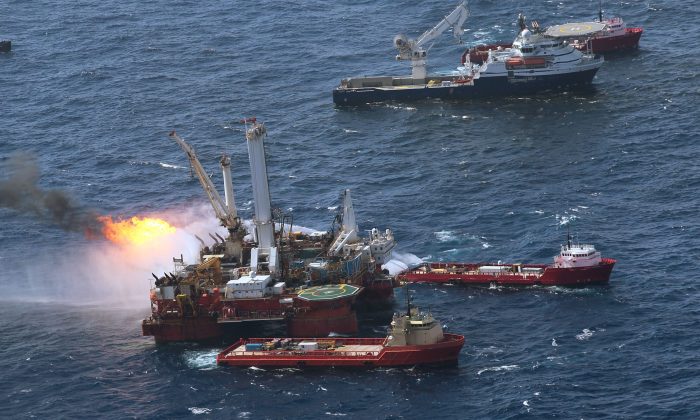 Support ships are seen near where efforts continued to recover oil and cap the Deepwater Horizon spill site on July 3, 2010, in the Gulf of Mexico off the coast of Louisiana. In response to that spill, the Obama administration has developed stricter standards for offshore drilling. (Joe Raedle/Getty Images)
Opinion

Are We Ready for More Offshore Drilling?

The ocean waters offshore host vast fossil-fuel resources. In 2013, federal offshore oil production made up 18 percent of total U.S. production, a figure that is likely to increase in the future as onshore sources dwindle and we demonstrate the potential of new offshore reserves.

The Obama administration earlier this year unveiled a plan to open up limited areas in the Gulf of Mexico, Arctic, and Atlantic to oil and gas leasing. At the same time, the administration is looking to impose stricter regulations on offshore drilling operations, which were developed in the wake of the Deepwater Horizon disaster. But is the industry ready to meet these higher expectations of safety?

Putting a Number on Risk

In order to rationally discuss the components of safety, let’s talk about offshore drilling in terms of risk. From a quantitative standpoint, one can calculate risk as the product of the hazard and vulnerability. The first factor is the hazard, which is the likelihood of a disaster occurring, and the other factor is the vulnerability, or the expected loss from a disaster.

To look at overall risk, one would multiply hazard by vulnerability for all possible accidents and then sum these products. The resulting risk would be the total expected loss for the proposed drilling operation.

There are a variety of factors that contribute to a higher hazard level in the offshore environment compared with the onshore environment. Offshore wells can be more than a mile down in water, where very high-pressure/high-temperature (HP/HT) conditions beneath the seafloor raise the chance of well blowout and put more physical stress on equipment.

Offshore rigs are exposed to more severe storms and, at higher latitudes, sea ice. Just having a column of water between the rig and the wellhead introduces a slew of technical challenges: what movements between the rig and wellhead can the riser—the pipe that connects the wellhead to the rig—tolerate? How will mechanical and electrical equipment maintain reliability in the pressures and temperatures at the bottom of the ocean?

The International Association of Drilling Contractors Incidents Statistics Program reports that the rate of recorded accidents—a measure that includes injuries, fatalities, and lost time—in U.S. waters has fallen from 0.86 in 2010 to 0.62 in 2014. Note also that the recordable incident rate offshore is consistently and significantly less than that for onshore drilling operations.

Advances in safety technology, largely driven by industry, have played a major role in reducing this rate. For instance, one critical piece in maintaining safe control over wells is the subsea blowout preventer (BOP), which cuts and seals the well when an imminent blowout is recognized.

Much focus, including tougher proposed rules, has been placed on this particular type of device because in the Deepwater Horizon incident, the BOP failed. New BOPs have improved safety features, such as increased redundancy on critical components and remote triggering mechanisms. They have also been specifically designed for high-pressure/high-temperature wells.

Another improvement comes in the form of autonomous underwater vehicles (AUVs). These robots can scan the wellhead and riser for flaws, recognizing areas of potential leakage with an array of sensors. Historically, such monitoring has been performed with a remotely controlled vehicle, necessitating man time and surface ship support. But automating this task with an autonomous vehicle reduces the hazards associated with fatigue, corrosion, and excessive stress by allowing for more frequent and faster surveying.

Other advances include: advanced sensors for real-time monitoring of subsea components, specially forged metals for the subsea environment, and piping with embedded heating coils to prevent the formation of underwater ice-like structures known as hydrates, which impaired containment attempts at Deepwater Horizon. In addition, some operators have access to so-called measurement-while-drilling technologies to steer the drill bit away from hazardous conditions.

Besides looking at hazards, another way to minimize risk is to reduce system vulnerability. Oil and other pollutants are dispersed more easily in an aquatic environment than on land, boosting expected environmental loss. Monetary vulnerability is high because oil companies have to invest large sums of money to develop these offshore resources and because other industries depend on the ocean environment, such as fishing and tourism.

The Deepwater Horizon incident illustrated the importance of having a prepared response plan. New regulations for Arctic drilling propose faster response time. Proposals call for requirements that a capping stack, a device that seals in a well if the BOP fails, must be able to arrive within 24 hours after an accident, a containment dome within seven days, and a relief well (requiring a dedicated rig) within 45 days. If implemented by oil and gas companies, response times will be shorter, limiting the impact of any future spill on the environment.

Many of the newly proposed rules for offshore drilling address problems identified from the Deepwater Horizon disaster and incorporate knowledge learned from dissecting that event. Analyzing risk in the context of these scenarios only addresses the uncertainty in hazards that we are aware of.

It is also important, especially as drilling pushes into deeper waters and the more challenging Arctic environment that we try to identify and characterize hazards that we have not witnessed. Being caught off-guard by such events is often the greatest source of catastrophe.

Eugene Morgan is an assistant professor of petroleum and natural gas engineering at Pennsylvania State University. He is affiliated with the Society of Petroleum Engineering and the Society of Exploration Geophysicists. Previously published on The Conversation (theconversation.com).