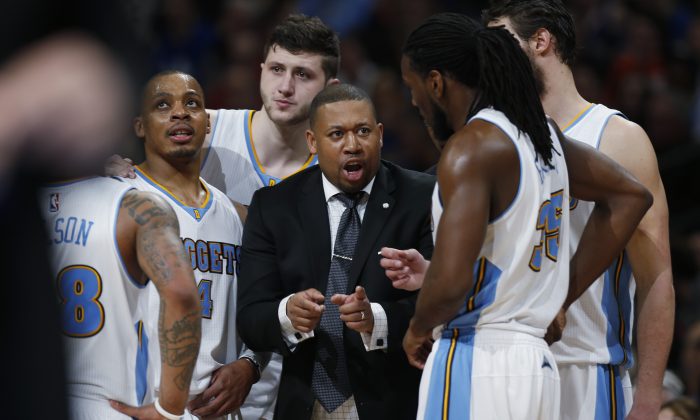 Denver Nuggets interim head coach Melvin Hunt, center, confers with his players during a time out against the Golden State Warriors in the fourth quarter of an NBA basketball game Friday, March 13, 2015, in Denver. The Nuggets won 114-103. (AP Photo/David Zalubowski)
NBA

Are the Denver Nuggets Tanking?

It’s no secret the Denver Nuggets–or at least many of the players–quit on coach Brian Shaw before he was fired.

But under interim head coach Melvin Hunt, Denver has become a dangerous opponents for playoff-bound opponents jockeying for seeds. The Nuggets are 6-2 since Hunt took over and started pushing the pace again in true Nuggets fashion.

Turns out, though, that winning might not be on everyone’s agenda.

Suspicions about the owners wanting the team to lose a fair amount of the remaining games cropped up on March 16 when Chris Dempsey of the Denver Post revealed that Ty Lawson, Kenneth Faried, and Danilo Gallinari–three of the Nuggets best players–will not play against the Grizzlies tonight due to rest.

“To be clear: Nuggets Interim head coach Melvin Hunt & his staff aren’t choosing to rest players. Nor are players asking to be rested,” he added via Twitter. That post seems to indicate that the owners/front office are trying to get the team to lose, thus resting the players.

An increasing number of teams are resting players even when they’re not injured, but they are primarily teams with some of the best records in the league, such as the Warriors, Grizzlies, and Hawks.

This twist, given the Nuggets will not face any of the playoff grind and that the season is almost over, provoked a strong reaction across the league. See some of the reactions below.

This rest thing is getting a little out hand when lottery teams decide to do it. I mean, rest – & lots of it – is coming in 4 weeks, fellas

Nuggets resting Faried, Lawson and Gallo tonight, per @dempseypost. That’s embarrassing. In a month, everyone will be resting.

“We just keep finding ways to win and we’ve got players who are going to step up.” #Nuggets pic.twitter.com/VYiKIDzXHG