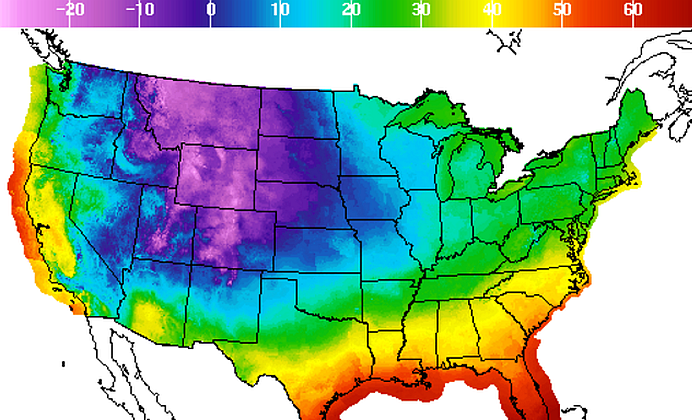 The dewpoint temperature forecast in the early morning on Dec. 8. (NOAA)
US

Arctic Weather Set to Hammer Most of US in Coming Days

A torrent of arctic air will spread through the United States in the coming days.

The frigid air from the Arctic will hit the contiguous 48 states starting on Wednesday, heading from the western United States to the east coast. The eastern portion of the United States will be inundated by cold on Friday, according to Accuweather’s forecast, describing it as the “coldest air of the season.”

The coldest says will be between 10-20 degrees lower than usual “from the Northwest to the Gulf and East coasts,” Accuweather said.

The National Weather Service has a more dire prediction. The Northern High Plains in Nebraska, Colorado, Kansas, Texas, Wyoming, and in other places will see a drop in temperature up to 35 degrees colder than normal.

Arctic air will settle across much of the United States by the end of the week https://t.co/kmbYtRZa6l pic.twitter.com/V85RS5LSth

Afternoon high temperature in cities like in Denver, Minneapolis, Chicago, Kansas City, and St. Louis will hit the 20s by mid-week, AccuWeather said.

As of Friday and Saturday, the high temperatures in the East Coast and Southeast regions will be in the 30s and 40s.

Very #cold temperatures continue to spread across the Lower 48 and will reach the South and East by late this week: https://t.co/zrnQs95e3G pic.twitter.com/1U0OCmZJZ8

Arctic air will continue to invade the U.S. this week. Parts of all 50 states will likely see below-freezing temps: https://t.co/iCtWJSFry2 pic.twitter.com/0qcTKV869p

It said Dallas could experience its coldest day since winter 2015 by the end of the week.

The Upper Mississippi Valley and across the Appalachians could also experience significant snowfall.

“Afternoon high temperatures in cities like Kansas City and St. Louis will be no better than freezing late in the week, while some places in the Dakotas may have a day or two where the temperature does not even get above zero,” AccuWeather Meteorologist Brian Thompson elaborated.