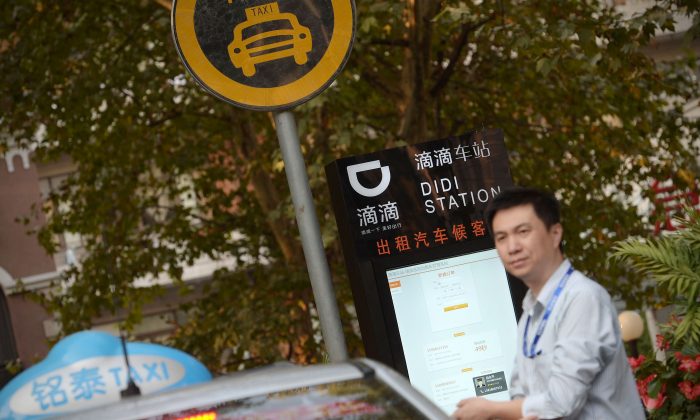 A taxi driver waits at a Didi Station, a road-side stop for taxis booked by the Chinese car-hailing app Didi Chuxing in Shanghai. (Chinatopix via AP)
Business & Economy

Apple typically doesn’t invest in startup companies, preferring to develop its own products. The investment also differs from past tie-ups such as Beats Electronics—Apple seemingly has no direct interest in ride-sharing.

The company’s $1 billion investment—inconsequential compared to its $230 billion cash balance—isn’t about Didi, it’s about Apple’s own future. As doubts about global growth of the iPhone emerge, this investment reveals much about the direction Chief Executive Tim Cook is looking to take the company.

Apple’s gambit is about keeping its foothold in China and staying relevant.

Thanks to the popularity of iPhone, China has become Apple’s second-biggest market after the United States, generating almost 25 percent of top-line revenue.

But that position is eroding as Chinese demand for the iPhone shrinks. After double- and triple-digit annual growths during the last five years, sales of smartphones grew just 2 percent in 2015.

Apple has long prepared for this, however, by pushing lucrative media services such as Apple Music, Apple TV, and its iTunes Store. Hundreds of millions of iPhones, iPads, and Mac computers are out there—the logical next step is to take a strategy from Amazon.com’s playbook and push digital media consumption.

ITunes and iBooks stores in China were shut down by Chinese authorities.

But its prospects in China already look grim on that front. Last month, Apple confirmed that its iTunes and iBooks stores in China were shut down by Chinese authorities, after only six months of operation.

Apple’s support of Didi—in opposition to its Silicon Valley neighbor Uber—is a gambit of symbolic appeasement to Chinese authorities. In putting money on the Beijing’s preferred horse in the ride-sharing race, Apple aims to keep its relevancy in a market indispensable to its future success.

Keeping China in its good graces is a shorter term play for Apple. Longer term, the Didi investment can pay dividends as Apple looks towards the next technology arms race—autonomous driving.

The global transportation paradigm is shifting on two fronts. One is an ongoing change from internal-combustion gasoline engines to electric vehicles, which involves traditional car companies and rivals such as Tesla Motors and a slew of other electric vehicle startups. At the same time, ride-sharing and taxi platforms such as Uber, Didi, and Lyft Inc. are redefining current understandings of transportation, public transit, and car ownership. ​

Most major automakers are invested. Alphabet and Fiat Chrysler Automobiles NV recently formed a partnership to experiment with Google’s self-driving technology in Chrysler minivans. General Motors Co. and Lyft are working on a fleet of driver-less taxis. Tesla already incorporates some hand- and foot-free driving features in its Model S sedan.

The Didi investment all but confirms Apple’s ambitions in the future of driving. Long an open secret in Cupertino, Apple has been working on driver-less vehicle technology for years. People familiar with the company’s plans told the Wall Street Journal that Apple has been recruiting from technology and automotive companies, and the project now involves more than 1,000 employees at the firm.

For now, Apple can use the troves of data from Didi to examine driver behavior and traffic patterns, augmenting its existing assets in mapping and artificial intelligence to deploy in any future driver-less car technology.

An About-Face on Startups

Apple shares have declined 14 percent year-to-date and 29 percent in the last twelve months on concerns about growth, specifically demand for its iPhone. A recent Nikkei report stated that Taiwan-based component makers are getting “significantly fewer orders from Apple in the second half of the year compared with a year ago,” alluding to possibly dampened demand for the upcoming iPhone 7 in the second-half of 2016.

Growth therefore could come in the form of future technologies outside of its traditional business. While it’s unusual for Apple to participate in a fundraising round for a startup, the Didi investment signals more activity in this space going forward.

Didi “gives them a better presence on the table in China, a better presence in the transportation market, it’s all the things Apple has aspired to having,” RBC Capital Markets analyst Amit Daryanani said on “Bloomberg Markets.” “It’s surprising Apple doesn’t have Apple Ventures as a more aggressive foray into doing this type of investment.”

But that could be changing. Cook recently hailed the strength of Apple’s balance sheet, including its $230 billion cash war chest. In a Wall Street Journal report in January, Cook said the company’s cash balance is “worth more” during periods of economic distress for startups as valuations drop and funding tightens.