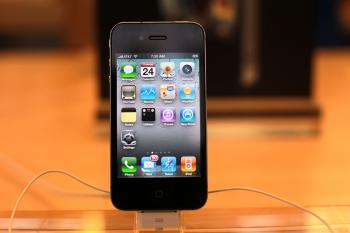 The new iPhone 4, which went on sale this morning, is displayed at the flagship Apple Store on Fifth Avenue on June 24, 2010 in New York City. (Spencer Platt/Getty Images)
Business & Economy

Antonio Perez
View profile
Follow
biggersmaller
Print
A TechCrunch report on Monday said that Apple Inc., the makers of the popular iPhone, has placed an order for millions of CDMA chips from Qualcomm Inc. for December delivery, citing insiders at Apple with knowledge of the information.CDMA chips are found on the Verizon Wireless and Sprint networks, and some analysts believe that the chip order are confirmation that a Verizon version of the iPhone will be due out in the market in January 2011.

A separate report, by the blog Cult of Mac, says that a high-level T-Mobile executive confirmed that Apple and T-Mobile USA are in advance stages of negotiations to bring the iPhone to the T-Mobile network.

Experts say a transition to T-Mobile will be much swifter than to Verizon, given that T-Mobile uses the same GSM network technology as AT&T Wireless, and the iPhones would not need to be altered to work on its network.