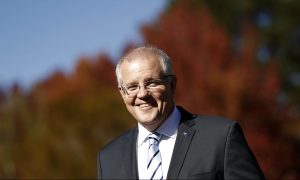 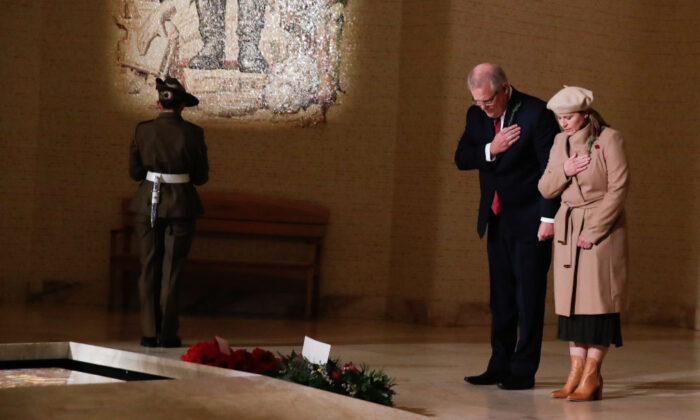 Prime Minister Scott Morrison and Jenny Morrison lay a wreath at the Tomb of the Unknown Australian Soldier during the Anzac Day commemorative service at the Australian War Memorial on April 25, 2020 in Canberra, Australia. (Alex Ellinghausen-Pool via Getty Images)
Australia

Anzac day will see a return of the veterans marching through the streets of Sydney, with the New South Wales government and NSW Police reaching an agreement with the Returned Soldiers League (RSL) to allow the parade.

The annual event, which celebrates Australia’s former and serving defence forces, was cancelled last year due to restrictions stemming from the CCP virus.

The exemption issued by Health Minister Brad Hazzard on Tuesday night will allow for 5000 attendees.

However, Police Minister David Elliot said he had an “iron-clad commitment” from Minister Hazzard that if the number reaches 5,000 “we will do another COVID plan and increase it to 10,000.”

“We encourage people to get out and support our serving veterans, our servicemen and women,” he said.

According to a health department spokeswoman, the number limit for Sydney CBD does not apply to spectators, and a limit of 3,000 people will be imposed for places in the state other than the CBD.

“I’m pleased that Anzac Day is on,” Morrison said on Wednesday. “This is a sign that Australia is back on track, the comeback is underway, Australians will come together in the way we always have.”

The prime minister had previously expressed his concern over the matter on Tuesday upon hearing that the NSW RSL had limited the number to only 500 people.

“I’m very pleased that we’re seeing changes being made to facilitate that happening across Australia. This is a sacred day for Australia,” he said. “We will remember those who have gifted us our peace, our security, our sovereignty, and our freedom, and I’m very pleased about the response that I saw yesterday from around the country.”

Ray James, the state president of RSL, told The Sydney Morning Herald on Tuesday that the RSL had only received 200 registrations to march at the moment.

Veterans who wish to participate in the march must first register on the RSL NSW website for the purposes of contact tracing.

In 2020, thanks to COVID-19 restrictions, Anzac Day marches were cancelled across Australia, and people instead celebrated with “Light Up the Dawn” driveway services, in which people were encouraged to hold a torch and stand on their driveways at dawn.