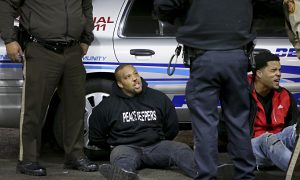 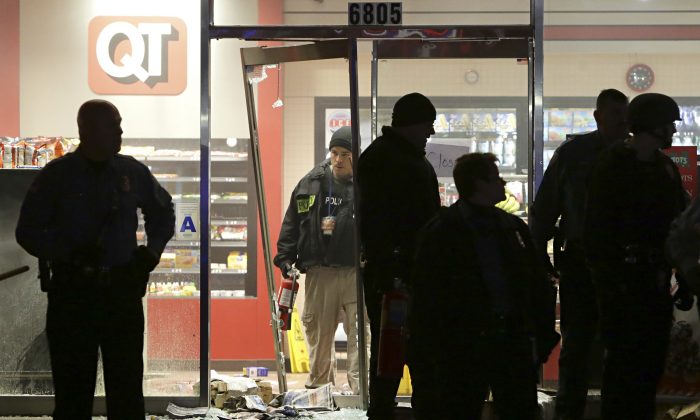 A police officer with a fire extinguisher stands in the broken out entry to a QuikTrip on Wednesday, Dec. 24, 2014, following a shooting nearby Tuesday in Berkeley, Mo. St. Louis County police say a man who pulled a gun and pointed it at an officer has been killed. (AP Photo/St. Louis Post-Dispatch, David Carson)
US

Missouri police said a black teenager, Antonio Martin, was shot and killed by a police officer near Ferguson on Tuesday night.

The St. Louis County Police Department said a police officer shot the suspect, who is black at a gas station in Berkeley, Missouri, located only a few miles from Ferguson. The name of the officer was not revealed by authorities.

“The Berkeley Police Officer exited his vehicle and approached the subjects when one of the men pulled a handgun and pointed it at the officer. Fearing for his life, the Berkeley Officer fired several shots, striking the subject, fatally wounding him. The second subject fled the scene,” said the St. Louis County Police in a statement.

A surveillance video was released by police, showing a male pointing a gun at the officer.

Belmar said that following the protests, extra police officers were deployed in the wake of the protests and riots over the Ferguson grand jury decision.

Addressing concerns that there might be another, Ferguson-like scenario in Missouri, “I don’t feel that’s going to happen,” Belmar said.

But he noted that protests against police after the incident “make it very difficult.” He added that the protesters have “jumped to conclusions.”

Belmar said that when the officer was in the parking lot, speaking with two people, one of the individuals “produced a pistol with his arm straight out, pointing it straight at the officer kind of from across the hood.”

The officer then grabbed his gun and fired about “three shots.”

St. Louis County Police released a video that shows the encounter. The officer was near the driver’s side of the vehicle and the suspect was on the other side.

According to the St. Louis Post-Dispatch, a woman at the scene Toni Martin-Green, said the person who was shot was her 18-year-old son, Antonio Martin.