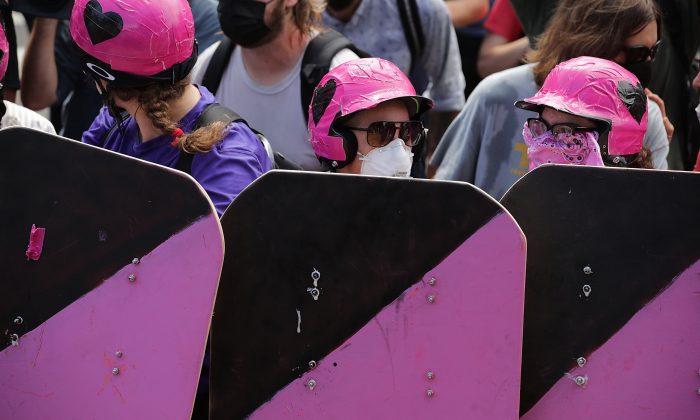 Counter protesters, some called the "antifa," face down members of the "alt-right" outside Emancipation Park during the Unite the Right rally August 12, 2017 in Charlottesville, Virginia. (Photo by Chip Somodevilla/Getty Images)
US

Antifa Protestors Crash Funeral of Heather Hayer, Show Up With Bats and Shield

At the Wednesday funeral of Heather Heyer, the woman mowed down by a white supremacist—a group of anti-fascist protesters decided to show up armed.

The protestors were part of Antifa, a group of far left protesters who showed up with purple shields and bats at the funeral located in Paramount Theatre, Aug. 16.

According to Taylor Lorenz‏, a reporter for The Hill at the scene of the funeral, the anti-fascist protesters claimed they arrived armed and ready since “the police won’t protect the people.”

Reports say police on the scene during the weekend riots were idly standing by and not showing any initiative to break up the clashes or form a barrier to divide the two groups.

“The policing on Saturday was not effective in preventing violence,” American Civil Liberties Union of Virginia stated in a Aug. 14 release. “In fact, law enforcement was standing passively by, seeming to be waiting for violence to take place, so that they would have grounds to declare an emergency, declare an ‘unlawful assembly’ and clear the area.”

The group of Antifa protesters was quickly “swarmed” by reporters, Lorenz‏ tweeted.

The line from the community to enter Heyer’s funeral in Charlottesville spanned two blocks, according to the reporter on the scene.

Heyer died during a “Unite the Right” rally which was protesting the removal of a Confederate statue. The rally members had a permit to protest and members included alt-right groups. Later they were met with a massive crowd of counter protesters including from Antifa and Black Lives Matter, and that’s when things started to get violent.