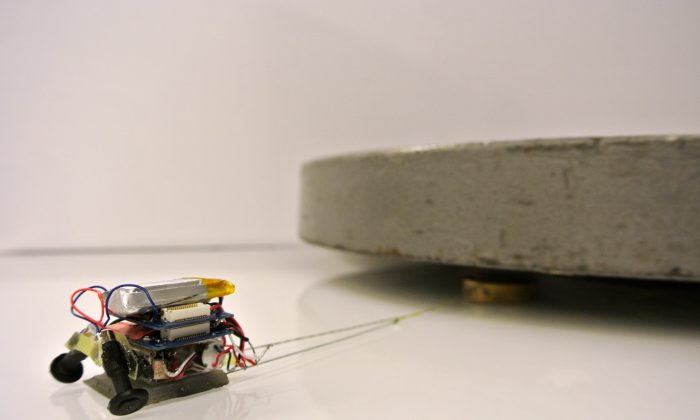 In the animal kingdom, the ant is renowned for its ability to carry objects hundreds of times its own weight. Stanford University researchers inspired by the nimble creature have created a miniature robot, dubbed the Micro Tug, that uses a unique adhesive technology to haul, and pull up, objects thousands of times heavier than the machine.

“This is equivalent to a human climbing up a skyscraper while carrying an elephant,” the researchers wrote.

The Micro Tug moves around on its two wheels, but it is stationary when it pulls the object. It unloads its shear adhesive torso on the surface and then reels in the object with a winch, as one would with a fishing pole.

The idea of controllable adhesion was taken from the researchers’ study of the Asian Weaver Ant, which is documented as being able to lift 100 times its own bodyweight.

The only other miniature climbing robot could only carry three times its body weight.

In the field of microrobotics, the Micro Tug is considered to be a leap forward: The only other miniature climbing robot, defined as less than 40 mm (1.6 in.) per side, could only carry three times its body weight.

Researchers envisage the Micro Tug as a prototype for future miniature robots that could have applications in “search and rescue, surveillance, and environmental monitoring,” such as carrying equipment to a person in a burning building or fixing damage in dams and bridges.

“Future models of the smallest robots would like to have more capabilities for traversal on different terrains, and better actuators and legs,” said David Christensen, one of the researchers on the team.