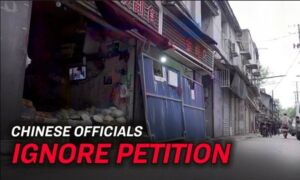 Wuhan, the CCP virus’s epicenter, is launching a citywide nucleic acid test. Authorities announced its plan to test tens of millions of people in Wuhan within 10 days. Critics pointed out that, with an accuracy rate of less than 30%, the new plan is more like a slapdash political ploy, and that it is possible that the CCP intends to use this test to deceive the world again with fabricated data.

According to state media, on May 11, secretary of the Wuhan Municipal Committee Wang Zhonglin demanded expansion in the coverage of nucleic acid testing. On the same day, Wuhan’s district disease control centers received an emergency notice that demanded all units across the city “must come up with a plan within 24 hours,” to implement nucleic acid screenings for all residents in the city within a “10-day period.”

Data from the National Bureau of Statistics of China shows that the residential population of Wuhan alone had exceeded 11 million in 2018. This means that, with a demand of more than 10 million tests in 10 days, the average number of tests performed in Wuhan must exceed 1 million per day. Li Qiang, vice mayor of Wuhan, once introduced at an epidemic control news conference in mid-April that the city has 53 nucleic acid testing agencies, 211 nucleic acid testing sites, and an average daily testing capacity of 46,000 people. Data from the Wuhan Municipal Health Commission’s website also showed the number of nucleic acid tests performed across the city on May 12 was less than 43,000. Clearly, this presents a huge gap from reaching the target of over a million tests a day.

Zhang Jian, a U.S.-based researcher on China issues, doubted that if a sizable city like Wuhan, with a population of more than ten million, could manage to test all its people within 10 days, then it also shouldn’t be a problem for all of China or even the world. However, currently, there are no cities in the world that can do that. Jian said: “With a mere accuracy rate of 20% to 30% for testing in China, tossing coins could present more accurate results than conducting a citywide test in Wuhan. With no scientific breakthrough and no strong medical system behind its back, the sudden plan to perform such a test is a political movement. As the CCP Virus spreads its way to the present day, Wuhan has become a world-wide political weather vane, a center of a political whirlpool.”

There has been speculation that Wuhan’s sudden “Great Leap Forward” to emergency testing is related to the CCP’s upcoming “Two Sessions” meeting, as the current state of epidemic control will affect the progress of the meeting and the political winds. A Chinese medical practitioner in Beijing, Zhao Zhongyuan, believes that the CCP might also be trying to digest the inventory of low-accuracy test kits, or might even use the citywide testing as an excuse to adjust the number of confirmed cases upward. Zhongyuan said, “The CCP’s coverup of the epidemic and its data fabrication is so outrageous that its figures are simply too low when compared to those of the world. Isn’t it possible that the CCP might release some of its hidden data so that it can get a confidence boost when speaking to the world?”

Furthermore, outsiders have questioned the 10-day deadline as too rigid. And for such large-scale testing, having no appropriate measures to close down schools and businesses or controlling traffic flow could lead to more unnecessary person-to-person contact and misreporting. Zhongyuan said, “Testings performed on 11 million people within 10 days will not be effective. Because the quality and accuracy of testing are much lower than that in the United States. How could it form such a strong medical team to get everyone tested? This is something unachievable. So it’s possible that the purpose of the act is to go through the motions and makeup data to lie to the world again.”

China-based Caixin News quoted a Chinese CDC epidemiologist who said that a campaign-style nucleic acid test is “costly,” “a waste of manpower and resources,” and unnecessary. Questions remain as to whether performing the nucleic acid test only once can accurately detect an infected person and to what extent false-negative testing results are present? Those are important factors influencing large scale screenings.

Many netizens have complained about the plan to test 11 million people in 10 days. Some people have mocked that it was even possible “for one Mu of land to produce 100,000 pounds of crops” (referring to the overexaggerated lie told by the CCP during the Great Leap Forward campaign about the crop production rate at that time in China). Some people mockingly said that there are plenty of test kits for use that have been returned from overseas! Some others said that even if the large-scale testing was possible to carry out, the accuracy rate of around 30% would make it all pointless.