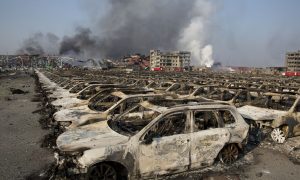 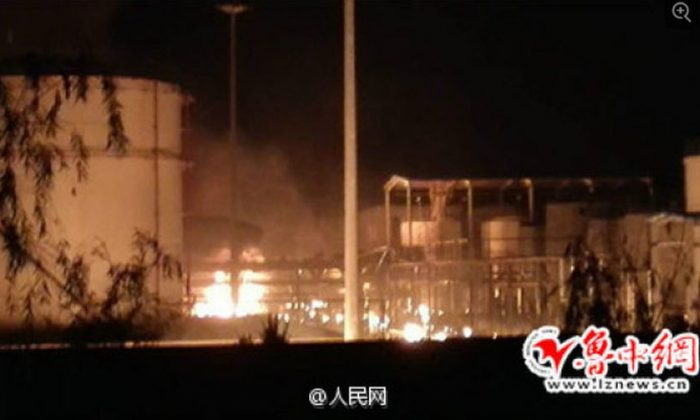 A photograph of the explosion and fire at a warehouse in a chemical plant in Zibo, Shandong, on Aug. 22. (Weibo.com)
China

Another Explosion at Chemical Warehouse in China, Close to Residences

A warehouse at the Runxing Chemical plant in the eastern province of Shandong exploded and caught fire on Saturday evening, just weeks after another massive blast in the port city of Tianjin.

No casualties were immediately reported. The blast took place in the city of Zibo, Shandong.

As in the previous explosion, residences were close by: only 1 kilometer (0.6 miles) according to Chinese news reports.

The impact of the blast could be felt over a mile away, and it shattered windows in the immediate vicinity.

State news reports say that dozens of fire trucks are on the scene.

People’s Daily, a state-run news outlet, posted photos of the fire and a fire truck on its official Twitter account.

BREAKING: Chemical warehouse in Shandong exploded on Sat. Firefighters are at the site now pic.twitter.com/DdZ5o3k4sk

Shandong Blast: Photos of the scene where a chemical plant exploded on Sat. Residential area is nearby pic.twitter.com/YUFlMuOhnx

The previous explosion in Tianjin took place at a logistics center on Aug. 12, leaving a gaping black crater in the ground. Windows in apartment blocks up to a mile away were shattered.

The blast may have released hundreds of toxic chemicals into the surrounding environment, including at least 700 tons of sodium cyanide, a chemical that becomes highly toxic when dissolved in water.

The Tianjin explosion killed at least 121 people, and injured hundreds of others. Another 54 people are missing.

The Chinese authorities say investigations into the blast are being carried out, and have identified and detained 10 top executives from the chemical company who owns the logistic center.

Chinese citizens have criticized local officials for mismanaging the disaster, as well as providing limited information about the disaster and strictly policing the Chinese Internet.