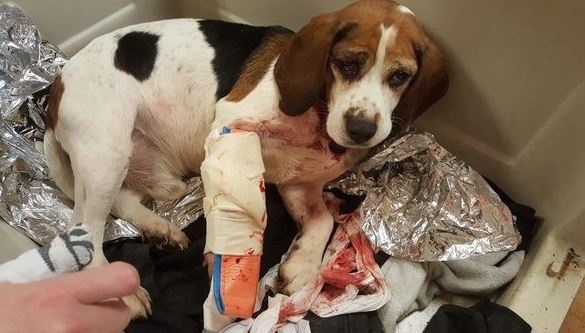 Two dogs, including Trooper, pictured, were thrown from a moving SUV in New York state on Dec. 12, 2018. They were picked up by a truck driver and are recovering at an animal shelter. (New York State Police)
NY News

A $16,500 reward is now being offered for information leading to the conviction of the people who threw two dogs out of a moving car in New York on Dec. 12.

A truck driver told New York State Police troops that he saw a vehicle, which he believes was an older Dodge Durango, slow down on I-18 southbound between the exits for Marathon and Whitney Point.

He then saw someone roll down the rear passenger window and hurl the canines out into the snow.

The driver stopped and recovered the animals. Troopers pulled over when they saw the man carrying a badly injured dog with another dog following behind him.

A state police K9 handler also arrived on scene and bandaged the injured dog to stop bleeding and splinted its leg while other troopers kept the dog warm in a warming blanket and the truck driver’s sweatshirt.

They were taken to the Broome County Humane Society.

“We applaud the heroic actions of the truck driver and the New York State Troopers who acted quickly to save the lives of Trooper and Adam. We urge anyone with information to come forward, to ensure the perpetrators of this act of cruelty are brought to justice,” Stephen Wells, executive director for the Animal Legal Defense Fund, said in a statement.

The defense fund teamed up with other animal welfare agencies to put up money for the reward; $10,000 came from the fund, $5,000 from PETA, $1,000 from the New York State Humane Association, and $500 from a private individual, according to the state police.

Anyone wanting to adopt the two beagles who were recovered can call the Broome County Humane Society at (607) 724-3709.

Just thought we would share a few more pictures of Trooper! Enjoy!#hesatrooper

The leg of one of the beagles, “Trooper,” was so severely hurt from the throw that veterinarians had to amputate the leg.

Vets at the Colonial Animal Hospital said he’s eating well and starting to move around as they equipped him with a harness so he could walk on three legs, reported CNY Central.

The society shared pictures of the beagle recovering.

The other beagle, “Adam,” had some scrapes and scratches but was otherwise OK.

“It’s horrendous that someone would do such a thing,” said Troop C Public Information Officer Aga Dembinska. “There are plenty of associations or shelters that will take these dogs.”

The Humane Society added in a Facebook post: “Two victims of an evil act that makes humans ashamed of humans….I’ve been sick to my stomach.”

However, the society added that lots of people have pitched in to help the dogs. “I just want to say that there are really bad people out there but also there are many, many good people here, too. And remember the good when united will always overcome the evil. From the bottom of our (broken) hearts we want to thank you all for everything you do!” it said.