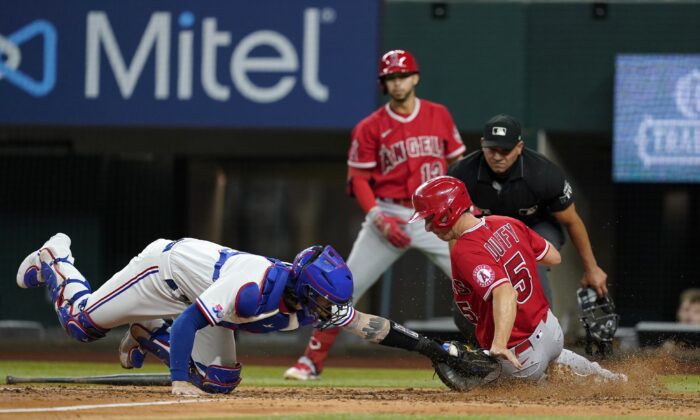 ARLINGTON, Texas—Taylor Ward hit a tie-breaking RBI double during Los Angeles’ three-run sixth inning that ended with a triple play and Matt Duffy had a two-run home run among three hits as the Angels beat the Texas Rangers 5–2 on Sept. 20.

Ward doubled into the left-field corner to score Shohei Ohtani from first base off Dennis Santana (3–8), the first of three Texas relievers. Mike Ford and Jo Adell added RBI singles off John King.

With the bases loaded and none out, Max Stassi hit a sharp grounder to third base. Josh Jung fielded the ball behind the bag, stepped on the base, threw to second, and Marcus Semien threw on to Nathaniel Lowe at first to complete the triple play.

It was the Rangers’ second triple play this season—a club first—and the eighth in the franchise’s 51 seasons in Texas.

“You’re hoping to add a little more there,” Angels interim manager Phil Nevin said. “You’ve got to hit it hard to hit into a triple play, especially when you go the 5–4–3 route. Just an unfortunate play.”

“It was hit in the perfect spot,” Rangers interim manager Tony Beasley said. “It led (Jung) to the base. Probably one of the easiest triple plays I’ve ever seen.”

Patrick Sandoval (6–9) got his third consecutive win after giving up the tying run in the fifth inning. Sandoval allowed both Rangers runs on three hits, striking out seven and walking four.

Three Angels relievers held the Rangers scoreless on two hits through four innings with Jimmy Herget earning his sixth save in nine opportunities.

The Angels have won four of their last five games and opened a lead of 1 1/2 games over the Rangers in the race to finish third in the AL West.

Sandoval’s winning streak follows a seven-game losing streak that ran from mid-June to mid-August, but he has a 2.03 earned run average in his last nine starts. The winning streak began with a complete-game shutout of Detroit on Aug. 19.

“I tinkered with some things right before my start in Detroit,” Sandoval said. “It’s really helped these last two months.”Texas has lost 17 of its last 22 games to fall a season-high 21 games below .500.

Sandoval gave up a first-inning RBI double to Corey Seager and didn’t allow another hit until the fifth. Bubba Thompson beat out a bunt for a two-out single and scored on Semien’s double to center.

Duffy pulled a 3–2 fastball just inside the left-field foul pole for his second home run of the season. Both have come in his last eight games. Duffy was reinstated on Aug. 29 after missing 52 games with back spasms.

Angels 1B Mike Ford had a career-high three hits. …Ohtani has hits in six straight games and 16 of his last 20.

The strikeout string of Rangers DH Mark Mathias ran to eight straight plate appearances before he was pulled for a pinch-hitter in the sixth inning.

Veteran Angels C Kurt Suzuki, 38, told local media before the game that he plans to retire following this season.

Rangers RHP Dane Dunning (3–8, 4.49) is 0–2 in his last five starts and hasn’t made it through five full innings during that span.