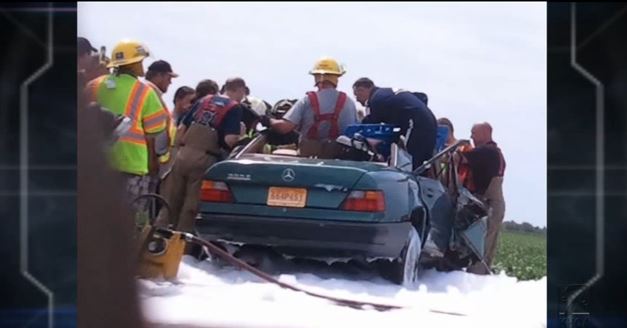 An image shows the scene of the accident involving Katie Lentz and Aaron Smith. (Screenshot/YouTube)
Beyond Science

Rescue crews spent the first 45 minutes after the accident trying to free Lentz, who was pinned between the steering wheel and the seat. Medical workers told rescue crews that Lentz’s health was beginning to deteriorate. So New London Fire Chief Raymond Reed decided to move the car, which was on its side, back on all four wheels.

15 minutes later, Lentz asked rescue workers to pray out loud for her, according to KHQA. That’s when an “angel” priest seemingly approached out of nowhere.

“He came up and approached the patient, and offered a prayer,” Reed said. “It was a Catholic priest who had anointing oil with him. A sense of calmness came over her, and it did us as well. I can’t be for certain how it was said, but myself and another firefighter, we very plainly heard that we should remain calm, that our tools would now work and that we would get her out of that vehicle.”

Another fire department showed up right after that with more equipment and manpower and Lentz was freed, and put into a helicopter to be taken to a hospital.

That’s when the rescue workers looked for the priest, to thank him. But he was gone. And the highway had been blocked for a quarter-mile each way during the 1.5 hour rescue.

“Where did this guy come from?” Lentz’s friend Travis Wiseman asked. “We’re looking for the priest and so far, no one has seen him. Whether it was a priest as an angel or an actual angel, he was an angel to all those and to Katie.”

The man had silver hair, looked to be in his 50s or 60s, and was wearing black pants and a black collar with visible white insert, according to USA Today. No one recognized the man.

“We’re all local people from four different towns,” Reed said. “We’ve only got one Catholic church out of three towns and it wasn’t their priest.”

“I have 69 photographs that were taken from minutes after that accident happened — bystanders, the extrication, our final cleanup — and he’s not in them,” Reed said. “All we want to do is thank him.”

Lentz sustained major injuries during the crash, which was on August 4, and has already undergone multiple surgeries to mend several broken bones.

The driver of the other car, Aaron Smith, has been charged with driving while intoxicated, as well as second degree assault.