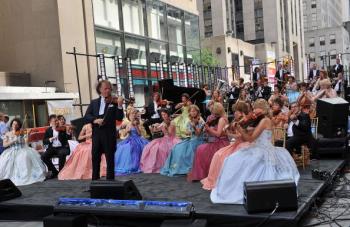 Caden Pearson
Reporter
Caden Pearson is a reporter based in Australia. Contact him on caden.pearson@epochtimes.com.au
View profile
Follow
biggersmaller
Print
Popular violinist, composer and conductor, Andre Rieu, has been forced to cancel his sold out Australia and New Zealand tour due to illness.

A press release from his official website said he is suffering a severe viral infection of the inner ear which has left him unable to carry out his tour commitments.

Mr Rieu released an emotional message to fans saying he was heartbroken about the cancellations. He expects to make a full recovery and "return soon”, according to AAP.

A message on his Facebook page said, "Dear fans, unfortunately André hasn't recovered enough yet to be able to do the UK and Australian tour. We have to postpone these to early next year. A new date will be announced as soon as possible. Thank your very much for your understanding and sorry for the inconvenience!"

Fans around the world left well-wishing messages for Mr Rieu. “So hard to imagine André being ill, but I certainly hope he recovers very quickly and completely with no residual effects," said a fan called Kay on his official website.

New tour dates will be published as soon as possible. Those fans unable to attend the concert on the new dates have been advised to return to their point of purchase for a refund.