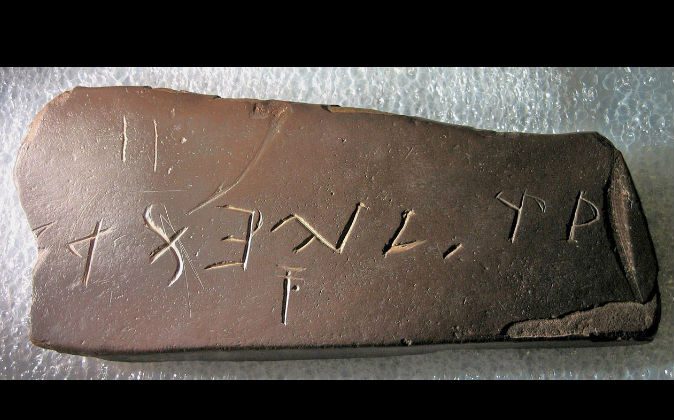 Ancient Travels to the Americas or a Modern Forgery? Who Made the Bat Creek Inscription?

The Bat Creek Stone was discovered in a small mound near Knoxville, Tenn., in 1889. It is a small stone tablet engraved with several mysterious characters.

The stone was discovered by a team led by archaeologist and ethnologist Cyrus Thomas from the Smithsonian Bureau of Ethnology’s Mound Survey. Eight years earlier, Congress assigned the Institute to complete archaeological excavations.

After just a few years of exploring the prehistoric mounds, archaeologists had collected over 40,000 artifacts and wrote a 700-page report of their findings, which was presented in 1894. Thomas wondered if the tablet displayed a pre-Columbian language.

He was fascinated with the tablet and its secrets, however he didn’t have enough knowledge or tools to examine the discovery properly.

In the 1960s, two other researchers, Henriette Mertz (a patent attorney, ancient history researcher, and code-breaker for the U.S. government) and Joseph Corey Ayoob, noticed that the inscription looks like ancient Semitic writing.

In the 1960s, two other researchers, Henriette Mertz (a patent attorney, ancient history researcher, and code-breaker for the U.S. government) and Joseph Corey Ayoob, noticed that the inscription looks like ancient Semitic writing.

Moreover, Cyrus Gordon, a specialist in late-Semitic languages, asserted in the 1970s that the language is a Paleo-Hebrew language. He dated the inscription to the first or second century A.D. He also read the five letters from the right to the left (as it should be read in a Hebrew language) and transcribed LYHWD, meaning “for Judea.” Other interpretations suggest that the text reads LYHWD(M), “for the Judeans,” “only for Judea,” or “only for the Judeans.”

Another theory suggests that the writing could be a Welsh Coelbren language. According to authors Alan Wilson and Baram A. Blackett, the tablet was inscribed with the ancient Welsh Coelbren alphabet. The researchers read it as “Madoc the ruler he is.”

Thus, scientists must look for other ways to find the origins of the artifact.

The dating of the tablet is also a controversial issue. Radiocarbon dating suggests that it was created between 45 B.C. and 769 A.D. The dates were made with fragments of artifacts discovered near the tablet. It is impossible to get satisfactory results from the radiocarbon tests for the tablet, because it was touched by too many people and influenced by too many substances after its discovery.

Currently, the Bat Creek Stone belongs to the Smithsonian Institution in the Department of Anthropology collection. It was loaned to the Museum of the Cherokee Indian and was also on display in the Frank H. McClung Museum at the University of Tennessee, Knoxville, for a time.

The mound in which the tablet was found has been plowed flat, so its precise location is forgotten.

The mound in which the tablet was found has been plowed flat, so its precise location is forgotten; only descriptions of it have survived. According to the notes written by 19th century archaeologists, the Bat Creek mound contained nine burials. The owner of the land cut down trees growing on the mound 40 years before the excavations began. He discovered that something interesting was located under the trees.

Years later, archaeologists found out that he was right. The roots of the trees entered the tombs and went down to the skeletons.

Ancient Travelers to the Americas

Legends about ancient travelers to the Americas have not been accepted into mainstream history. Apart from medieval Norse expeditions, some say Polynesians, Japanese, and other peoples reached the Americas before Christopher Columbus.

Not all researchers are convinced of the antiquity of the Bat Creek tablet.

Not all researchers are convinced of the antiquity of the Bat Creek tablet. They claim that it could have been created by people in the 19th century.

One hypothesis is that Europeans wanted to reinforce their claim to land in the New World by creating fake evidence that it had belonged to them in antiquity as well. Unfortunately, as long as the mound remains lost and no more evidence appears, it seems that the problem of the Bat Creek Stone will remain unsolved.