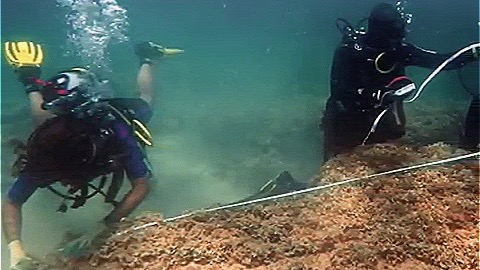 Ancient Roman City Discovered Under the Sea Near Tunisia

Part of a lost Roman city was discovered underwater, off the coast of Tunisia.

Researchers hypothesized that part of the ancient city known as Neapolis was submerged in an ancient tsunami, 1,700 years ago. A team from the Tunisian National Heritage Institute and the University of Sassari in Italy were put together to find Neapolis, in 2010. Only recently were the ruins found. Part of the find is owed to recent ideal weather, Phys.org reports.

Researchers can be seen in the videos scuba diving through the plant-ridden ruins on the ocean floor, in a place people must have walked through in ancient times.

Neapolis means “new city” in Greek. The underwater ruins are located off the coast of the Tunisian city of Nabeul. Written records of Neapolis are few among the Roman archives, possibly because the city betrayed Roman allegiance, according to experts. Neapolis went through periods of Roman, Carthaginian, and Arab rule, the Daily Mail reported.

An underwater expedition found streets, monuments, and over 100 tanks used to produce garum, a fish-based sauce condiment eaten by ancient Greeks and Romans.

“This discovery has allowed us to establish with certainty that Neapolis was a major center for the manufacture of garum and salt fish, probably the largest center in the Roman world,” said Mounir Fantar, who leads the Italian-Tunisian mission. “Probably the notables of Neapolis owed their fortune to garum.”

The ruins stretch out for 50 acres. The city was confirmed to have been partly submerged in a tsunami caused by an earthquake that also damaged Alexandria, Egypt, and Crete, back on July 21, A.D. 365. The research team was able to match historical records with what they found.

At the time of the ancient disaster, two tremors wrecked the region, one measuring magnitude 8.0. Parts of Crete were pushed up 33 feet, Science Alert reported.

Ancient historian Ammianus Marcellinus recorded what little knowledge there is of the city in his writings on Roman history.

The Neapolis ruins that don’t lie underwater are part of Nabeul. In history, Nabeul was built on top of Neapolis by Arab arrivals. The Tunisian government did little to protect the ruins until recently.