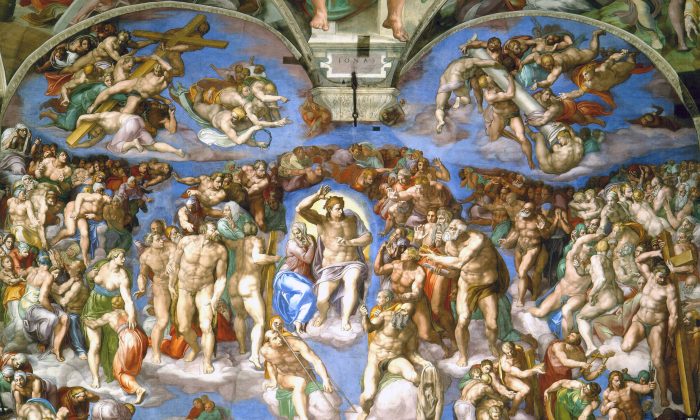 The Oculus is a building unlike any other in New York. A giant skeletal chamber, large,  impressive, and sterile. It sits like an eye in the middle of the World Trade Center.

The Oculus, the centerpiece of this shopping center and transportation hub gives first-time viewers reason to pause and take a photo, but does not carry the kind of divine inspiration one would experience in the Sistine Chapel—until now.

Up Close: Michelangelo’s Sistine Chapel exhibit opened at Oculus on June 23 and is giving busy visitors out for a new iPhone or transferring from a New York subway to one of New Jersey’s path trains a chance to see some of the most beautiful art in the world.

The Oculus has played host to artistic displays before, crystaline commercial displays for an audio equipment maker, and crafted exhibits for tastefully displayed (and exclusively priced) accessories. But this is the first experiential art exhibit to open at Oculus according to Scott Sanders, creative head of global entertainment at Westfield World Trade Center, Oculus’s home.

“When Santiago Calatrava designed this architectural wonder that is Oculus downtown and World Trade Center, he envisioned it as a people’s cathedral. And so when Westfield who operates all of the center here started to think about, ‘We wanted to do experiential art exhibits, let’s do art installations in the Oculus’, who better than Michelangelo to kick things off?” said Sanders.

Pope Julius II commissioned Michelangelo to paint the ceiling of the Sistine Chapel in Rome between 1508 and 1512. The celestial vision he created draws 6 million visitors from around the world every year, approximately the same number of commuters that pass through this transportation hub in America’s largest city every four weeks.

Not that visitors to the Oculus will experience the true grandeur of Michelangelo’s vision. But they will see large photographs by Erich Lessing of 34 of the frescoes, including the famous “Creation of Adam” and “The Last Judgment.”

Art historian, Dr. Lynn Catterson said the exhibit was a special experience for people passing through

“I think that in this busy city full of billboards, neon, commercial, people wearing Statue of Liberty hats, I think it’s nice to have something that is not just commercial—something that has stood the test of time,” she said. “The imagery itself is powerful enough to provoke curiosity on people that are out shopping,” Catterson said. “And I think that’s a great opportunity.”

Up Close will be open at Oculus until July 23 before going on to visit Sacramento, Los Angeles, San Diego, Seattle, Chicago and Annapolis, Md.