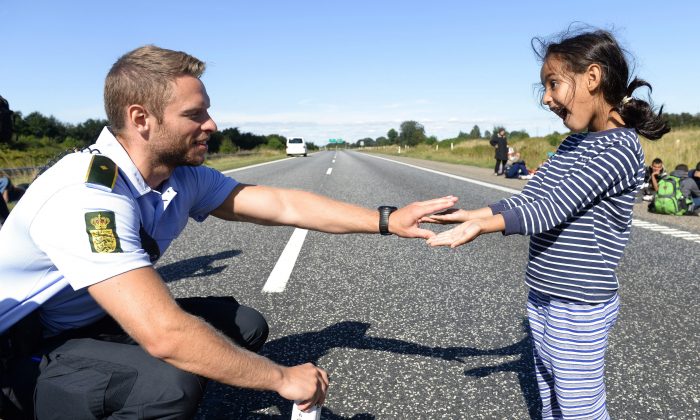 Danish policeman plays with a migrant girl as a group of migrants attempt to walk at the E45 freeway from Padborg, on the Danish-German border, towards Sweden, on September 9, 2015. (CLAUS FISKER/AFP/Getty Images)
Europe

PARIS— A 24-year-old Danish woman sails refugees across windy straits to safety in Sweden. A Romanian whose ancestors were driven from their homeland opens his house to today’s migrants. A girl brings pens and paper to migrant children sleeping at a Milan train station.

While European governments string barbed wire across borders and lambast each other over asylum rules, ordinary citizens are taking action to cope with an unprecedented inflow of migrants, their generosity offering moments of hope for the newcomers—and for Europe itself.

“Europe is the baker in Kos who gives away his bread to hungry and weary souls. Europe is the students in Munich and in Passau who bring clothes for the new arrivals at the train station. Europe is the policeman in Austria who welcomes exhausted refugees upon crossing the border,” EU President Jean-Claude Juncker said earlier this month. “This is the Europe I want to live in.”

Long-established aid groups and freshly created online forums are working collectively and tirelessly to help where governments can’t, or won’t. But individual acts of kindness are what many migrants will remember, whether they build new lives in Europe or eventually make it back to Syria, Sudan, or wherever they call home.

These are but a few among the many, many people who have stepped out of their daily lives to contribute.

“Welcome. Do you want to go to Sweden?”

Annika Holm Nielsen and Calle Vangstrup greeted refugees at Copenhagen’s main train station with a sign bearing this message, offering to sail them from Denmark across to Sweden, where asylum policies are friendlier.

It’s just a couple of hours with good winds to Malmo, Sweden, but for asylum seekers, it could be the end of a long and perilous journey.

Their first passenger was an exhausted Syrian refugee. During the crossing, he was too nervous to eat or sleep until he arrived within reach of the shore.

Many Danes have helped refugees make it across the border by car, train, or boat—despite the risk of being arrested for smuggling. Nielsen and Vangstrup decided to go public to raise awareness and encourage others to do the same.

In 1943, ordinary Danes helped more than 6,000 Danish Jews cross the narrow Oresund Strait between Denmark and Sweden in boats, after word went around that Nazi German authorities were planning to round them up.

Vangstrup lamented rising xenophobic and far-right sentiments today in some European quarters. “The world hasn’t gotten any better,” he said.

A Romanian student was on the train listening to John’s Lennon’s “Imagine” when the idea came to him: to welcome Syrian migrants into his family home.

Their plight reminded Tudor Carstoiu of his own ancestors. His grandfather, great-aunt and great-grandparents had been twice forced out of their home in northern Romania, which was occupied by Soviet troops during World War II.

The family traveled to Poland, Germany, and Hungary before settling in Romania. Six years ago, Carstoiu moved to Milan, where he’s a graduate student and IT consultant.

The 26-year-old is among many Europeans whose own families faced persecution or exile, and who are now reaching out to today’s refugees. In Croatia, where tensions have soared along the border with non-EU member Serbia, people whose families were forced from their homes during the 1990s Balkan wars are among those offering food to migrants.

Carstoiu’s offer—and attitude—stand in contrast with Romania’s government, which was one of four EU members to vote against a plan last week to share asylum seekers across the 28-member bloc. There is scant public support for the idea in one of the poorest EU nations.

Carstoiu hasn’t settled a family yet in his three-room family home in the small village of Silindia, but he is working on it—he’s setting up a nongovernmental organization in Italy to coordinate housing and other help for migrants, and wants to reach out to refugees directly via social media or in person.

Fittingly, Carstoiu said the house was renovated with money his family won from a Romanian property restitution fund after they sued for the house they lost during World War II.

While Romanian politicians fear that migrants wouldn’t integrate, Carstoiu noted that millions of Romanians like himself have emigrated in recent years, and have largely succeeded in fitting in.

Many financially battered Greeks resent the unprecedented numbers of hungry people arriving on their easternmost islands, but many others are reaching out—and opening their pantries.

In Athens, refugees sleeping in a city square receive visits daily from residents who bring them something to eat, something to wear.

There’s the baker, mentioned by Juncker, who handed out bread to refugees on the island of Kos. On nearby Lesbos, a priest, Efstratios Dimou founded and operated a charity providing food, clothing, and a place to rest. He died last month, but his charity carries on his work.

In Athens, refugees sleeping in a city square receive visits daily from residents who bring them something to eat, something to wear.

Foreigners are playing a role, too. Eric and Philippa Kempson, Britons living on Lesbos, help bring hundreds of migrants to shore every week, greeting them with water and apples as they reach land.

Eric Mills, a California native who now lives in Barcelona, was traveling in Turkey when he realized the gravity of the crisis, and found a way to help on the small Greek island of Symi. He and a friend rose before dawn and spent several hours a day preparing and serving food to hundreds of hungry new arrivals.

His volunteer spirit awakened, he hopes to motivate friends in the United States and Spain to pitch in, and find ways to subsidize or otherwise help refugees find haven in Europe, “one family at a time.”

Targeted help is often the most useful. In the French port of Calais, Brigitte Lips has for years charged migrants’ cellphones in her garage. For people living hand-to-mouth in filthy nearby camps, it’s a cherished way to stay connected to their families and the outside world.

Others are setting an example. Finland’s prime minister is opening his spare house to refugees on Jan. 1 after his family moves to the official prime minister’s residence in Helsinki.

Pope Francis’s call for help resonated with a Polish priest, Radoslaw Rakowski in Poznan. “I announced from the pulpit that we want to host a family,” he said—and that Sunday, the church collected 24,000 zlotys ($6,500) toward renting an apartment.

A Syrian man living in Poznan has offered to be an interpreter. One family offered to teach them Polish. Another offered to take care of children when parents are busy with administrative visits.

In the Milan train station, volunteers have been helping migrants since 2013, some staying day and night. Lots of individuals bring donations—including 11-year-old Alice Chiappelli. Worried about fellow children homeless in a foreign land, she brought them paper and pens to pass the time.